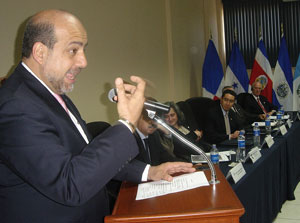 22 February 2008 - In a recent event at the International Law Enforcement Academy (ILEA) in San Salvador, El Salvador, UNODC launched a regional project aimed at strengthening national and regional capacities to fight trafficking in persons in Central America. The event marked the official beginning of an important initiative to support law enforcement, prosecutorial and judicial authorities of the region, which is gravely affected by this crime.

According to the UNODC publication "Global Patterns on Human Trafficking", several Central American countries are source, transit, and destination countries for men, women and children from other Central and South American states trafficked for the purpose of sexual and labor exploitation. Governments of the region are making significant efforts to pass anti-trafficking legislation and are devoting resources for the establishment of specialized anti-trafficking units. However, more has to be done to effectively prevent, prosecute and adjudicate trafficking cases. Harmonizing national legislation according to international standards and training public officials are crucial to address this transnational crime.

The launching event was opened by high-level authorities from El Salvador, including the Attorney General, Félix Garrid Safie (the speaker in the picture), and Dr. Elías Carranza, Director of UN Latin American Institute for the Prevention of Crime and the Treatment of Offenders, ILANUD, and the UNODC Representative for Mexico and Central America, Jose Manuel Martínez. The Attorneys General from Costa Rica, Francisco Dall´Anesse, and Guatemala, Juan Luis Florido, as well as delegates from Attorney General´s Offices of Honduras, Nicaragua and Panama participated as guests of honor. The ceremony was also attended by representatives from diplomatic missions, international organizations, NGOs and an official from the Mexican National Commission on Human Rights. The National Anti-Drug Commission from El Salvador provided logistical and financial support.

During the launch event, the UNODC Representative highlighted that UNODC, as custodian of the Palermo Convention and the Protocol to Prevent, Supress and Punish Trafficking in Persons, especially Women and Children, will contribute to the fight against trafficking in persons by offering its expertise on measures to combat organized crime. The new project focuses on training police, prosecutors, magistrates and judges, as well as border control and migration officers. Coordinating anti-trafficking efforts with other local and international organizations at the national and regional level, specifically to ensure the protection of victims and witnesses, is also an important aspect of the project. A working partnership with ILANUD has been established to implement this regional programme.