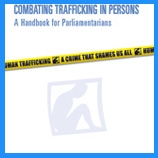 8 April 2009 - Yesterday in the Ethiopian capital, the Inter-Parliamentary Union (IPU) and UNODC, in the framework of the Global Initiative to Fight Human Trafficking (UN.GIFT), launched the publication Combating Trafficking in Persons: A Handbook for Parliamentarians. "Parliaments and parliamentarians have the power to prevent human trafficking by raising awareness and curbing exploitative practices", said UNODC Executive Director Antonio Maria Costa. The President and Secretary General of IPU, as well as the Speaker of the Austrian Parliament, were present at the launch.

As public awareness of human trafficking grows, people are demanding that action be taken to end it. As elected representatives, parliamentarians have a responsibility and the power to ensure that laws and other measures are put in place and implemented to that end. The Handbook is intended to inspire them to enact sound laws and adopt good practices that will strengthen national responses to human trafficking.

The Handbook also contains a compilation of international laws and good practices developed to combat human trafficking and offers guidance on how national legislation can be brought in line with international standards by, for example, defining trafficking in persons and criminalizing all its forms. It outlines measures to prevent the commission of the crime, to prosecute offenders and to protect victims.

"I urge you to use this Handbook, not only as a reference, but as a blueprint for strengthening your country's response to this crime" Mr. Costa added. Clearly, parliamentarians have a role to play in the fight against human trafficking. As agenda-setters and voices of the people, they can have significant power and influence in developing anti-human trafficking laws and policies.

To view the Handbook for Parliamentarians (pdf)