This day in history: The Shanghai Opium Commission, 1909 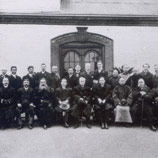 Although the original plan was to limit the conference to the situation in Asia, it was argued that the issue could only be addressed if all the major producing, manufacturing and consuming nations attended. A compromise that ensured that delegates only acted in an advisory capacity to their governments allowed most of the colonial powers of the time to attend.

The Commission had an effect even before the delegates convened, as countries instigated reforms in order to be able to show progress at the meeting. As a result of these changes, a number of countries reported significant declines in their opium imports and sales prior to 1909. The most important of the changes made before the Commission was the bilateral agreement which bound Britain to gradually eliminate its opium sales to China, and bound China to eliminate its own poppy cultivation between the years 1908-1917.

The conference also enabled the identification of the main opium trade flows. The largest exporter of opium at the time was India, followed by Hong Kong and Singapore, which were primarily re-exporters rather than producers. The largest global importer was China, who imported 3,300 tons, and the largest European importer was the UK with 386 tons, although the bulk of this was re-exported.

Aside from exchanging data and information, the International Opium Commission also made a number of non-binding recommendations. It was agreed that it was undesirable to import drugs into a country where their use was illegal. While the Commission was not mandated to provide binding agreements, it still was a great success because it did set the stage for the signing of The Hague Opium Convention just three years later, which then formally established narcotics control as an element of international law.