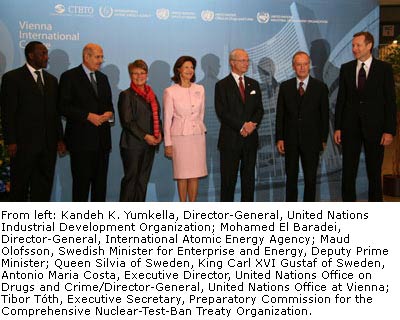 22 November - The United Nations headquarters in Vienna received Their Majesties King Carl XVI Gustaf and Queen Silvia of Sweden during their State visit to Austria yesterday.

He praised Sweden as a world leader in drug prevention. "The biggest challenge to control and reduce the world's drug problem is to improve prevention and treatment" he said.  Drug use in Sweden was just a third of the European average while spending on drug control was three times the EU average.

He said the successful Swedish policies were a model that other countries could emulate. The key was long-term action, such as prevention, law enforcement, demand reduction and treatment, backed up by sufficient funding and support from civil society.

Mr. Costa thanked Sweden for its support for UNODC. In 2007, it was the single largest national donor to the Office, contributing US$12.75 million for special programmes, or 9 per cent, of all voluntary funding.

Paying tribute to Queen Silvia's commitment to fight human trafficking, empower women and end the sexual abuse of children, Mr. Costa explained that his Office had launched a Global Initiative to Fight Human Trafficking. The Initiative, known as UN.GIFT, will help prevent trafficking, protect the victims and punish the criminals. In February 2008, the Vienna Forum to Fight Human Trafficking will take place to build on international momentum to combat this shameful trade.

Queen Silvia is active in numerous benevolent organizations, including the Mentor Foundation that works to prevent drug abuse. She also co-founded the World Childhood Foundation, a charity that aims to protect children from sexual abuse and offer victim support.