Durban, South Africa - 30 July 2018 - In South Africa, statistics on trafficking in persons (TIP) show that although TIP for sexual exploitation still is the main form of exploitation, TIP for forced labour is also being detected more and more. In order to prevent but also to better identify and assist victims of these crimes, the Global Action against Trafficking in Persons and the Smuggling of Migrants ( GLO.ACT) facilitated a three-day workshop on TIP from 10 to 12 July 2018 for social workers from the Provincial Department of Social Development in KwaZulu Natal. In terms of the Prevention and Combatting of Trafficking in Persons Act 7 of 2013, the Department of Social Development is responsible for assessing and identifying victims of TIP and issuing TIP letters of recognition for adult victims or draft assessment reports for the children's court for child victims. It is therefore imperative that social workers know and understand the elements of TIP in order to be able to correctly identify them as victims of TIP to draft these letters and reports.

The main objectives of the workshop therefore were:

Opening the workshop, Mr. Vusi Khoza, Director, Victim Empowerment, Department of Social Development in KwaZulu Natal said that "this training workshop is the best platform to equip social workers with skills to assist them to do their jobs in an excellent way". He went on to say, "Trafficking in persons in KwaZulu Natal has widely been associated with sexual exploitation, but we are beginning to see more cases of labour exploitation. We therefore hope that the training will cover other types of exploitation." 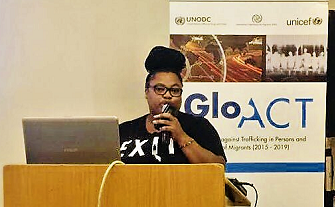 One of the highlights of the workshop was a presentation given by Ms. Grizelda Grootboom, a TIP survivor and advocate. During her poignant speech she said, "I have survived a life of human trafficking. I had a happy home until it was taken away from me, until my world fell apart. After eighteen years of being trapped in the world of drugs and prostitution, I found an exit."

Over the three days, participants worked on the following topics:

The workshop was highly interactive in nature and incorporated many best teaching practices, such as working through several real TIP and SOM case studies case studies in small group settings. Speaking about how she will use what she learnt at the TIP training workshop, Ms. Mpumelelo Shiba, a social worker for the Provincial Department of Social Development said, "I will be in a better position to issue letters of recognition for victims of trafficking in persons, now that I understand the elements of trafficking and the indicators of trafficking in persons". She also said, "I will ensure that proper referral mechanisms are followed when potential TIP cases are brought to my attention." 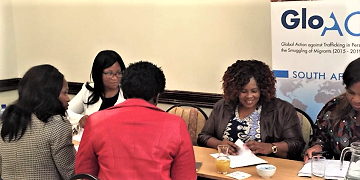 Participants included the National Prosecuting Authority (KwaZulu Natal Province), the Provincial Department of Social Development, the Department of Justice and Constitutional Development and the International Organization for Migration.