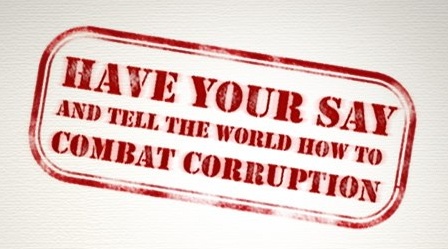 9 December is the International Anti-Corruption Day.  UNDP and UNODC, since 2009, have promoted global public campaigns to mark the International Anti-Corruption Day and make it powerful day of action against corruption. The campaign theme for 2009 and 2010 was 'Your No Counts'. The "ACT - Against Corruption Today" theme was adopted for the 2011 and 2012 campaigns. The 'Your No Counts' and 'ACT' campaigns encourage involvement of all sections of society in addressing the root causes of corruption and also serve as a platform for policy dialogue and action at national and global level.

Criteria for selecting the theme and logo

-          It should be catchy and appealing, and be able to mobilize public, state and non-state actors

Criteria for participating in the competition

All applicants should complete this form and send the entries to iacdcompetition@gmail.com by March 15,2013 by 23:30 GMT. The logo can be sent as a JPEG file.

A panel of judges will select the winning entry based on the above mentioned criteria. The UN reserves the right not to appoint a winner and theme if the entries received do not meet the quality standards of the competition criteria. The UN also reserves the right to seek additional information from the applicants to verify the identity of the applicant(s) and the authenticity of the submission

The winner(s) will be announced publicly through the UNDP and UNODC websites and on the website of the 2013 campaign. The winner(s) will receive a paid trip to New York (economy flight and accommodation) to join us at an event to mark the 2013 International Anti-Corruption Day.