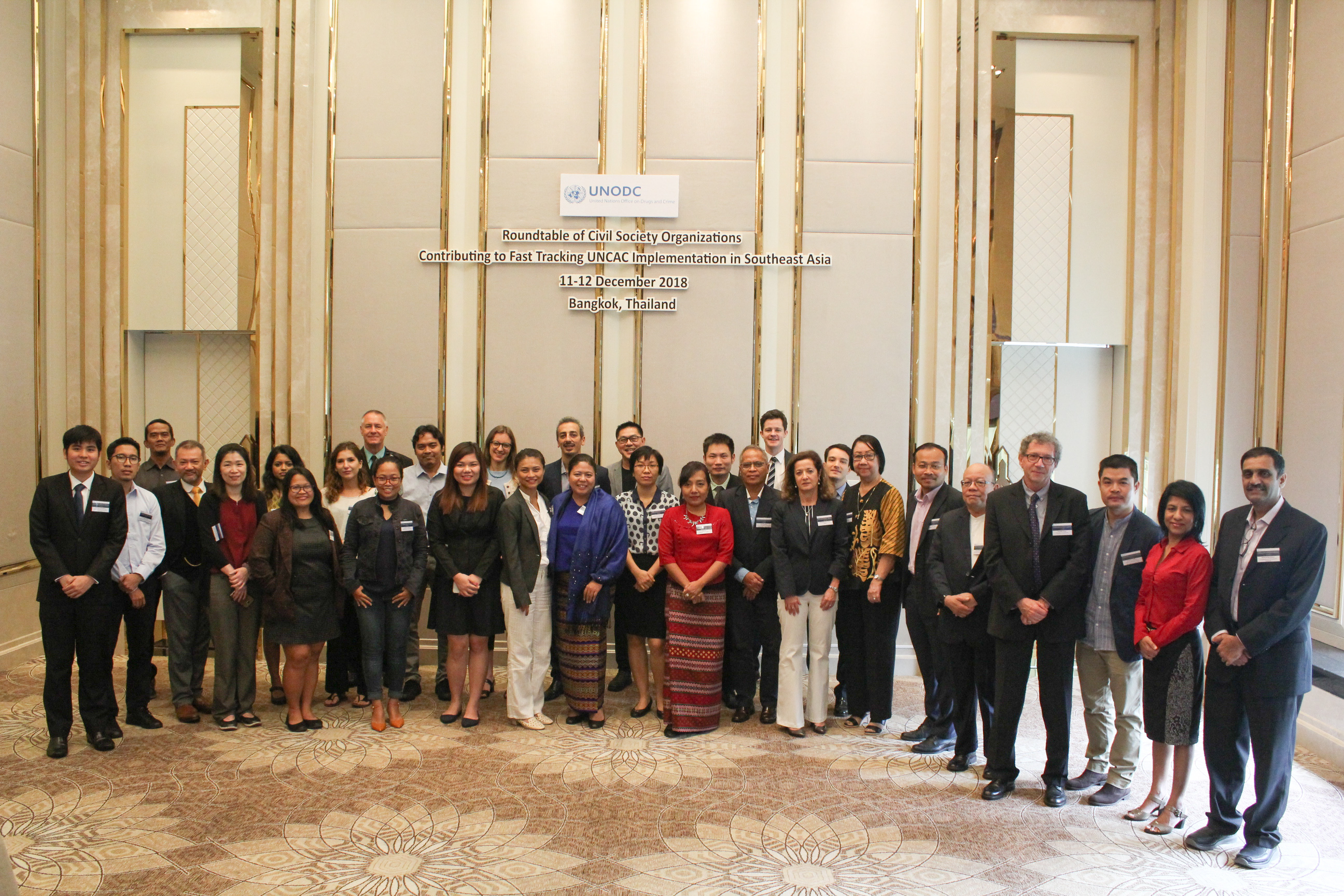 11-12 December 2018 -  Civil society organisations (CSOs) from across Southeast Asia gathered in Bangkok to set future priorities and avenues for collaboration to fast-track the United Nations Convention against Corruption (UNCAC)'s implementation in the region. The 26 participants from nine countries agreed to follow-up through the three thematic working groups covered in the roundtable, namely public procurement, CSOs engaging with the private sector, and access to information, and in addition, decided to form a fourth working group on human rights and corruption.

The two-day event was the first opportunity since the launch of the Southeast Asian Anti-Corruption e-Platform in May 2018 for platform members to meet and focus on future collaborations between CSOs, the Civil Society Team (CST), and the Regional Office for Southeast Asia and the Pacific (ROSEAP).

CSOs and UNODC discussed which initiatives best contribute to fast-tracking the implementation of the UNCAC, while marking International Anti-Corruption Day 2018. The roundtable was jointly organized by CST and ROSEAP in response to recommendations that came from CSOs participating in the multi-stakeholders fast-tracking conference which took place in February 2017 in Bangkok.

Mr. Julien Garsany, Deputy Regional Representative, ROSEAP, at the opening the event stressed the importance of anti-corruption initiatives through the UNCAC to preserve stability, security and combat extremism in the ASEAN region. He said "This year we celebrate the 15 th anniversary of the UNCAC, this is the occasion to measure progress in its implementation at the national level, and a lot remains to be done. In the ASEAN, the only existing regional anti-corruption framework is the UNCAC, which makes it of critical importance to tackle corruption at both national and regional levels".

Ms. Cynthia Gabriel, co-founder of CSO C4 in Malaysia and member of the coordination Committee of the UNCAC Coalition said, "CSOs play a strategic role in preventing corruption, improving accountability and transparency. While we are celebrating the International Anti-Corruption Day on 9th December, and the Human Rights Day on 10th December, let us not forget corruption is a human rights issue".

The roundtable concluded on an agreement to review progress in one-year time on the targets formulated within the four working groups.