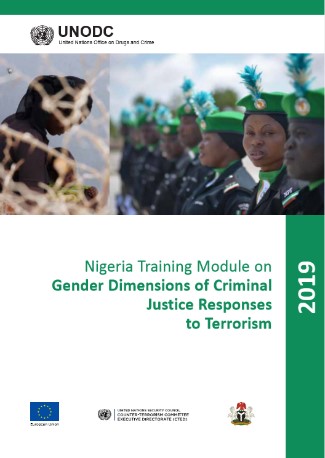 Abuja, 2 December 2019 - Today, the United Nations Office on Drugs and Crime (UNODC), in partnership with the European Union, the Federal Ministry of Justice and the Federal Ministry of Women Affairs and Social Development, will launch its new  Nigeria Training Module on Gender Dimensions of Criminal Justice Responses to Terrorism.  This training tool tailored specifically to the Nigerian context for local criminal justice and security sector personnel, as well as policymakers, and been developed jointly by Nigerian and international experts.

The Launch of the module has been organised to coincide with the  16 Days of Activism against Gender-Based Violence, which is an annual international campaign that kicks off on 25 November, the International Day for the Elimination of Violence against Women, and runs until Human Rights Day on 10 December. The aim of this international campaign is to increase awareness of gender-based violence, galvanize advocacy efforts, and share knowledge and innovations for the prevention and elimination of violence against women and girls.

The UNODC module focuses on how men and women are differently involved in and impacted by terrorism and pays close attention to the role of women, both as perpetrators and as victims of terrorism-related offences. It also highlights the importance of considering gender perspectives in the context of counter-terrorism investigations and prosecutions, and stresses the vital importance of ensuring accountability for sexual and gender-based violence perpetrated by terrorist groups, as well as of providing access to justice and remedies for victims. Finally, the module aims to help officials investigate and prosecute sexual and gender-based crimes by providing analysis of applicable domestic legal frameworks, and outlining proven investigative strategies and tactics.

UNODC hopes that the module will be used to enhance the capacity of women and men in law enforcement, security and judicial systems to adopt gender-sensitive practices throughout the investigation, prosecution and adjudication of terrorism cases in order to protect victims' rights, encourage reporting of these crimes, and prevent secondary victimisation by contact with the judicial system.

The module launch will also be graced by a series of high-level panels on topics such as 'Accountability for violence against women in a counter-terrorism context and support to victims' and 'capacity-building perspectives'. Panel discussions will encompass regional dimensions of gender, terrorism and counter-terrorism in the Lake Chad Basin context and link it to the Regional Stabilization Strategy (RSS) for the Lake Chad led by the Lake Chad Basin Commission (LCBC) in August 2018, and endorsed by the African Union Peace and Security Council in December 2018.

Welcoming the launch, Ms. Ifunanya Nwajagu, Director of the Legal Department of the Federal Ministry of Women Affairs and Social Development, said:

"The Federal Ministry of Women Affairs and Social Development, the focal agency in the implementation of the United Nations Security Council Resolution 1325, fully supports the development of the training module as an important step towards the realization of the targets of the National Action Plan on UNSCR 1325. The Ministry will provide a platform to respond to various gender dimensions of violent extremism."

Ms. Chioma Onuegbu, Head of the Complex Casework Group in the Department of Public Prosecution of the Federal Ministry of Justice, added:

"The Module should be viewed as complementing the strategic efforts of the Federal Government of Nigeria and Federal Ministry of Justice to address issues of discrimination, gender equality and surrounding issues related to the implementation and domestication of progressive federal legislations such as the Violence Against Persons (Prohibition) Act 2015, Trafficking in Persons (Prohibition) Enforcement and Administration Act 2015, Child Rights Act 2003 and the Administration of Criminal Justice Act 2015, both at the federal and state levels."

The launch was also attended by several representatives of the international community. Speaking on behalf of the European Union Delegation to Nigeria, which had provided the funding for the development of the Module, Kurt Cornelius, Head of Coordination, emphasized the importance of this initiative:

"The EU fully supports the UN Secretary-General's commitment to place women at the centre of the UN's conflict prevention platform and its reinforced diplomatic efforts and shares the UN SG's assessment that more effort is needed worldwide in order to improve delivery on key commitments under the Women, Peace and Security agenda.Today's launch of the training module is part of this exercise. We commend the joint efforts of the UN family and of the Nigerian government to make it a reality."

Masood Karimipour, Head of the Terrorism Prevention Branch of UNODC, which oversaw the preparation of the Module, added that he hoped the Module would help victims of sexual violence to gain some redress:

"We hope that this Module will help ensure that those who commit these terrible crimes will be brought to justice, that the voices of victims will be heard and respected, and that we can bring an end to the use of sexual violence as a weapon of terrorism."

"UNODC is greatly encouraged by the Government of Nigeria's recognition of the core role of women and girls as actors in preventing and countering violent extremism through the  Policy Framework and National Action Plan for Preventing and Countering Violent Extremism, and its efforts to mainstream gender throughout the criminal justice system more broadly. Still, more remains to be done to address the scourge of terrorism in Nigeria, by holding those responsible for committing acts of terrorism and to support access to justice for victims in a gender-sensitive manner. We are very pleased to place this  Nigeria Training Module on Gender Dimensions of Criminal Justice Responses to Terrorism at the disposal of our Nigerian counterparts to support their efforts to do so."