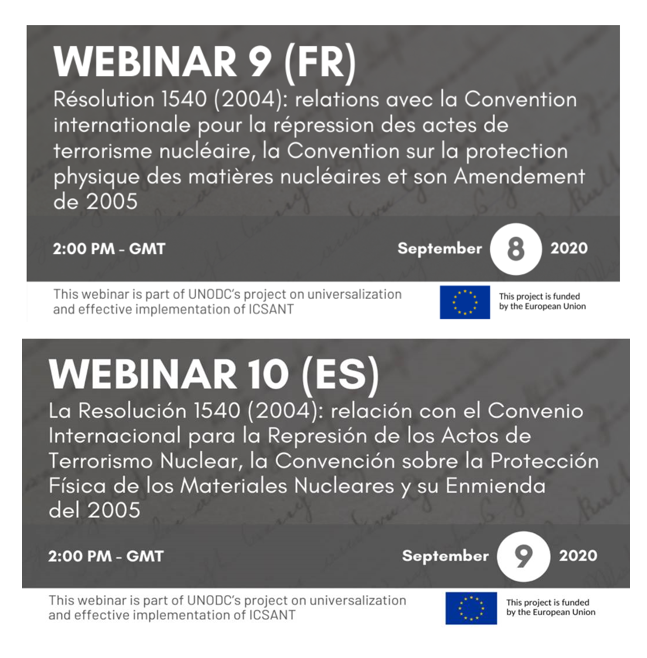 The risk that non-State actors may acquire nuclear weapons or related materials for terrorist purposes has been highlighted as a serious threat to international peace and security by the United Nations Security Council (UNSC) and others on many occasions. To curb this threat, the international community has over the years adopted international legal instruments. These instruments aim at securing nuclear and other radioactive materials, preventing terrorists from acquiring them and investigating and prosecuting acts of nuclear terrorism, should they occur.

In line with its mandate, UNODC has worked for the past 20 years to promote the international legal instruments dealing with nuclear terrorism. In this context, UNODC launched in 2020 a series of webinars on countering chemical, biological, radiological and nuclear (CBRN) terrorism.

Most recently, on 8 and 9 September 2020, UNODC conducted two webinars, held in French and Spanish. These webinars featured members of the Group of Experts supporting the work of the UNSC committee on UNSC resolution 1540 (2004). The resolution establishes wide-ranging measures for States to prevent the risk of proliferation of weapons of mass destruction, as well as their means of delivery and related materials, by non-State actors.

The webinars focused on UNSC resolution 1540 and its relationship to three instruments which are key components of the international legal framework on nuclear security (the International Convention for the Suppression of Acts of Nuclear Terrorism, the Convention on the Physical Protection of Nuclear Material and its 2005 Amendment). These instruments include provisions to address the ever-present threat of nuclear terrorism, by criminalizing specific conduct involving nuclear or other radioactive material and ensuring that there is no safe haven for their perpetrators.

It is worth noting that implementing the criminalization provisions of the seven international legal instruments against CBRN terrorism is one step that States may take towards fulfilling their obligations under operative paragraph 2 of resolution 1540 (2004).

Among the measures provided for by the resolution, is the adoption and enforcement of effective laws which prohibit non-State actors to engage in illicit acts involving nuclear weapons or related materials.

The webinars were funded by the European Union under UNODC’s project on universalization and effective implementation of the International Convention for the Suppression of Acts of Nuclear Terrorism and were delivered on UNODC’s Counter-Terrorism Learning Platform. Future webinars of the CBRN series will be held in October and December 2020 and will address specific aspects of these legal instruments.