Violent extremism and the phenomenon of returning foreign terrorist fighters (RFTFs) continue to pose a threat to international peace and security worldwide.

The Security Council has reported that violent extremist groups continue to operate though networks and members from the East Indian Ocean region, for which RFTFs are an important tool in recruiting and spreading violent extremist narratives.

In response to this, UNODC’s Terrorism Prevention Branch (UNODC/TPB) delivered an advanced online training on effective investigation, prosecution and sentencing of complex terrorism cases, including those of RFTFs. The workshop was tailored for police officers, prosecutors and judges of selected Member States in the Indian Ocean region. 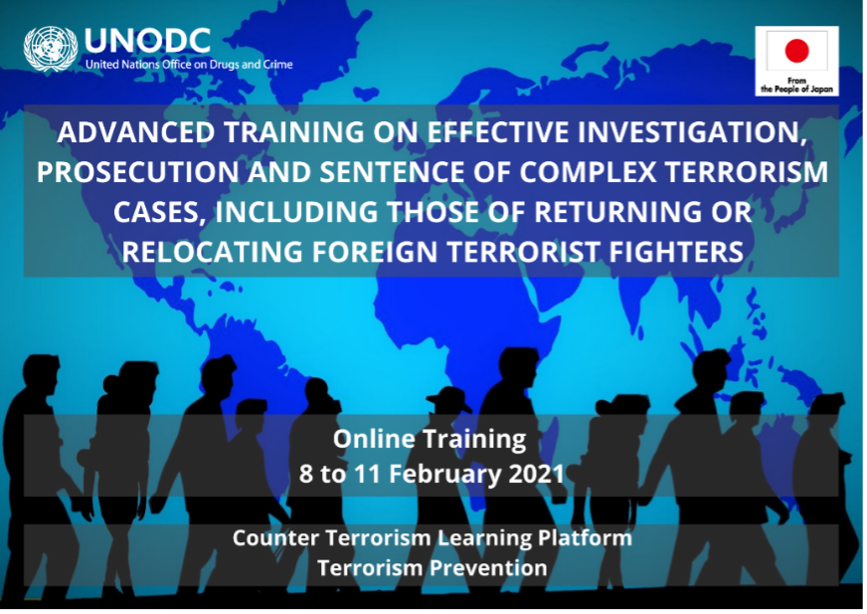 During the training, UNODC advised participants on international standards and good practices that apply to the management of complex terrorism cases, including repatriation and criminal justice responses related to RFTFs.

Her Excellency Keiko Yanai, Ambassador of Japan to Maldives, welcomed participants and commended the design of the training and rich content of the agenda, and especially noted the efforts to build engagement with local communities and the private sector.

The training, which was conducted on 8-11 February 2021, aimed to strengthen knowledge and capacity of law enforcement and criminal justice authorities on effective responses to repatriate, investigate, prosecute and sentence persons in complex terrorist cases, including RFTFs.

Leading experts from ten countries shared their knowledge and experience on available tools and good practices regarding each possible stage of the investigation, prosecution and sentencing process. This also included representatives from the private sector, namely Facebook and Google, who explored tools available to authorities in relation to the prevention of violent extremism leading to terrorism.

During each day of the event, participants also analyzed a training scenario in order to identify and discuss issues related to the repatriation, initial assessment, offline and online investigation procedures, and sentencing of RFTFs, including special measures and approaches related to women and children.

The content of the training was based on the updated version of UNODC’s handbook Investigation, Prosecution and Adjudication of Foreign Terrorist Fighter Cases for South and South-East Asia, which reflects current trends in the region and contains new content, particularly on rehabilitation and reintegration of offenders.

The training was conducted with the support of the Government of Japan.