STRIVE Juvenile Guidance Note on Juvenile Justice in the Context of Counter-terrorism in Indonesia: a key tool to strengthen the performance of the justice system 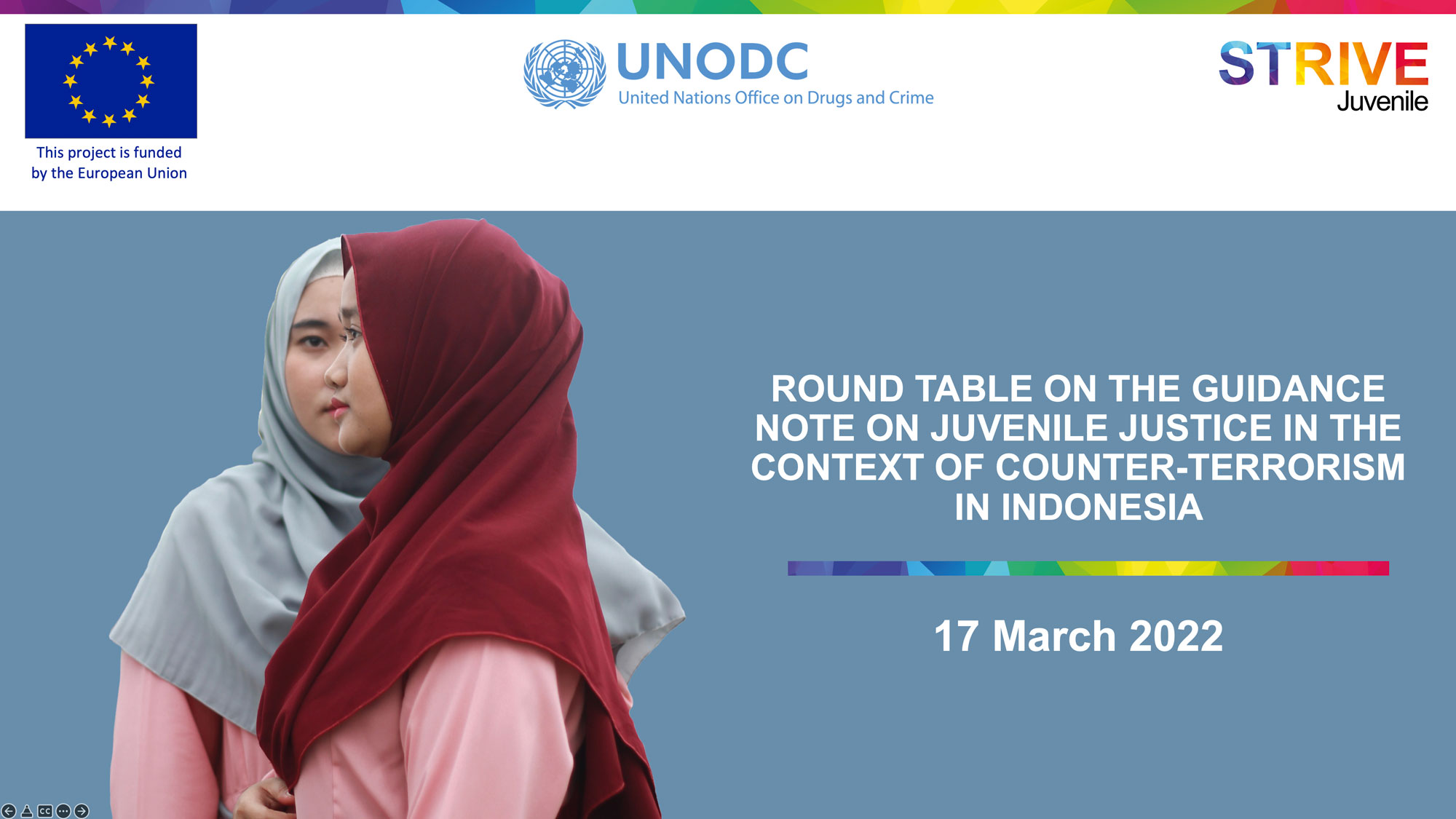 Jakarta (Indonesia), 17 March 2022 - UNODC - in close partnership with national counter-terrorism agency, BNPT and under the framework of its STRIVE Juvenile Project - held a national multi-stakeholder roundtable to support the Government of Indonesia in the development of a Guidance Note on Juvenile Justice in the Context of Counter-terrorism.

The national multi-stakeholder roundtable enabled participants, including policy makers and practitioners, to exchange ideas and identify opportunities for coordinated justice responses that will lead to the rehabilitation and reintegration of children formerly associated with terrorist groups.

In his opening remarks, M. Zaim A. Nasution, Director for Regional and Multilateral Cooperation of BNPT, stressed the need to adopt a whole-of-society approach and for international cooperation to tackle the phenomenon of child association with terrorist and violent extremist groups.

Stakeholders taking part in the roundtable recognised the value of a guidance note on juvenile justice in supporting national counter-terrorism efforts. The guidance note is the result of joint working between professionals from different institutions and will serve as a basis from which to strengthen the performance of the juvenile justice system; whilst helping to lay the ground for implementation of the National Plan of Action to Prevent and Counter Terrorism and Violent Extremism (RAN-PE).

Professionals who deal with children associated with terrorist and violent extremist groups, including children linked to the foreign terrorist fighters phenomenon, will be targeted with guidance on the treatment of children accused of terrorism related offences that responds to the needs of both children and society.

Marc Vierstraete-Verlinde, counter-terrorism expert and representative of the Delegaton of the European Union to Indonesia, stressed the importance of strengthening the capacity of professionals in this field and commended STRIVE Juvenile for its orientation towards improving practice among professionals and facilitating the exchange and transfer of knowledge.

The roundtable was also a unique opportunity to agree on a common position to juvenile justice in the context of counter-terrorism and represented an important step towards translating the 2020 'Bali Call for Action' into practice. 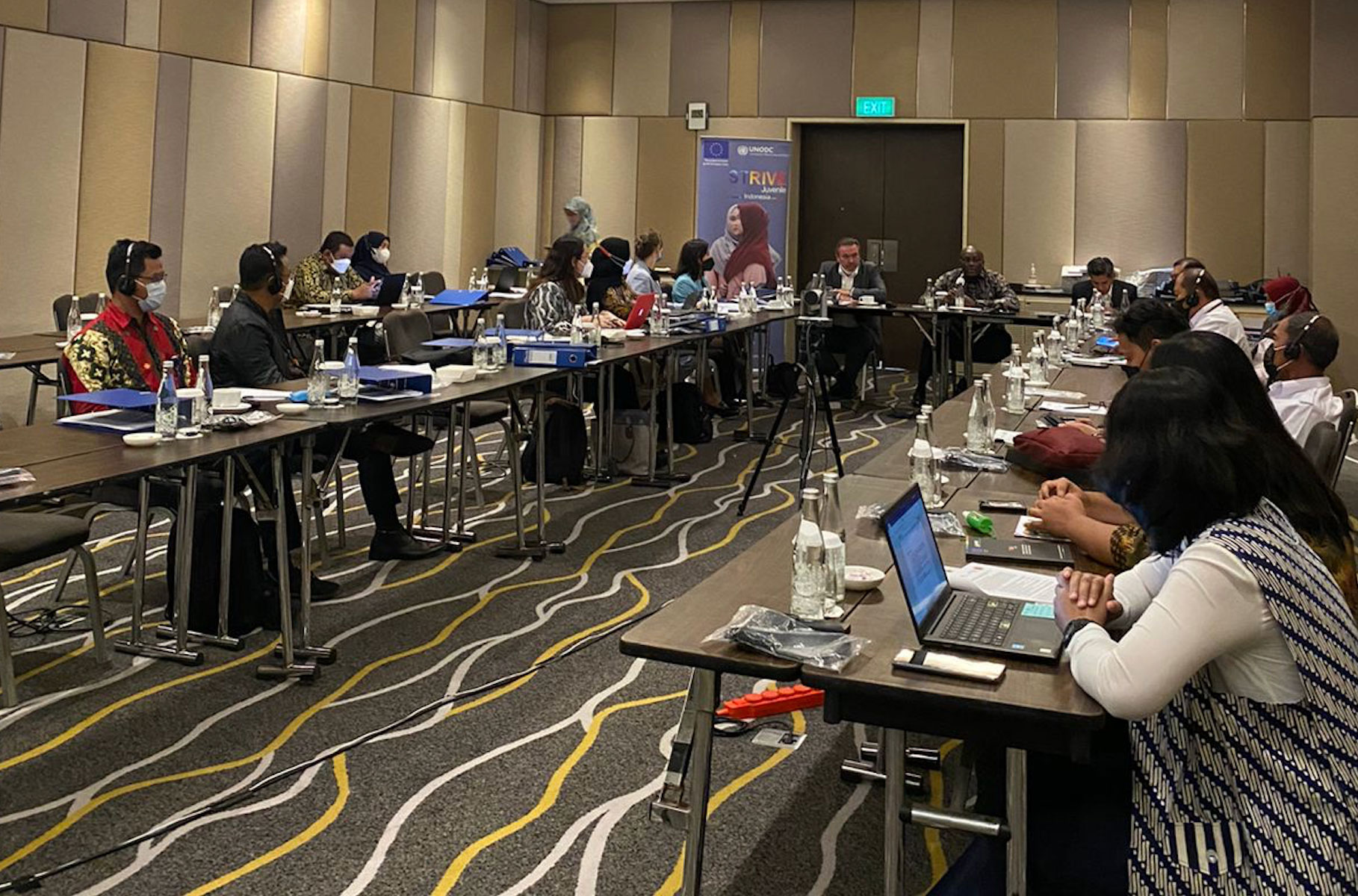 The second annual meeting of the Project Coordination Group of STRIVE Juvenile took place in Jakarta and brought together representatives from the security, child protection and justice sectors to discuss the project’s first year achievements and to review and endorse its 2022 workplan .

Mr. Andhika Chrisnayudhanto, Deputy for International Cooperation of national counter-terrorism agency, BNPT remarked that “the success of the STRIVE Juvenile Project is in the existence of a strong sense of national ownership and close cooperation between national stakeholders which ensures efficient coordination and shared responsibility for the national work plan.”

STRIVE Juvenile is an initiative sponsored by the European Union and implemented by UNODC in Indonesia under the leadership of BNPT. The project aims to protect children and society from threats associated with terrorism and violent extremism through the incorporation of national priorities into its design and implementation.

Meeting participants assessed the achievements of the first year of the project in three inter-related areas of intervention: research; legal and policy advice; and capacity building aimed at strengthening national systems and enhancing the resilience of children and communities. STRIVE Juvenile’s contribution to the implementation of the National Action Plan to Prevent and Counter Terrorism and Violence Extremism (RAN-PE) and its potential to inspire other countries to learn from Indonesia’s good practice was recognised and applauded.

Marc Vierstraete-Verlinde, counter-terrorism expert and representative of the Delegation of the European Union to Indonesia, stressed the European Union’s commitment to protecting children from all forms of violence, and mentioned that “investing in children, and in particular promoting their rehabilitation and reintegration, also means actively preventing violent extremism and building peaceful societies”

Following guidance and input from participants, the proposed work plan for the second year of the project was unanimously adopted.