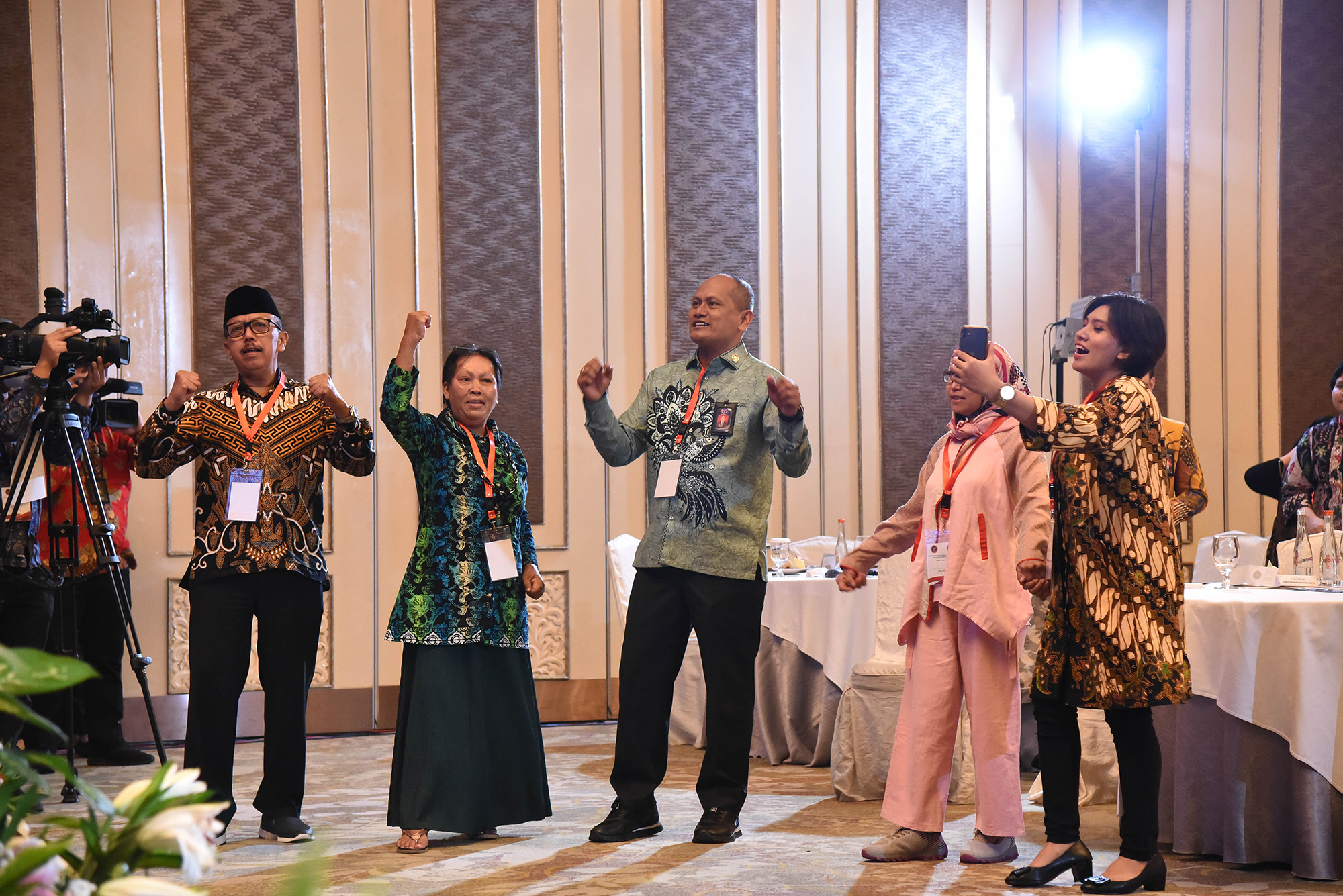 Jakarta (Indonesia), 21 August 2022 - UNODC through its peace initiative in Indonesia (the Guyub Project) has joined forces with the National Counter-Terrorism Agency (BNPT) and Witness and Victim Protection Agency (LPSK) to further support victims and survivors of terrorism, in the spirit of the International Day of Remembrance and Tribute to the Victims of Terrorism.

People who suffered because of terrorist attacks in the past must cope with the COVID-19 pandemic on top of the challenges thrust upon them by terrorism. Against this backdrop, UNODC, together with BNPT and LPSK, provided a platform where victims of terrorism were invited to share their experiences and testimonies. In line with a National Moment of Silence initiated in Indonesia in 2020 to take place every 21 August, a moment of silence was held in recognition of all victims and survivors of terrorism.

The Coordinating Minister for Political, Legal, and Security Affairs of the Republic of Indonesia, Prof. Dr. Mohammad Mahfud MD delivered keynote remarks at the remembrance event. “This occasion is an important moment to remember and honour the victims of terrorism and raise awareness to ensure that they are not forgotten, and their rights are fulfilled”, said Coordinating Minister Mahfud MD. He added, “the Government of Indonesia is deeply committed to fulfilling the rights of the victims of terrorism as stipulated in Law no. 5/2018 and Government Regulation no. 35/2020.” The Government, through LPSK and BNPT, has identified 1370 victims eligible to receive compensation and already provided compensation to 650 of these victims. Coordinating Minister Mahfud MD also expressed appreciation for BNPT, LPSK, and the United Nations for their continued commitment to honouring and fulfilling the rights of victims of terrorism. 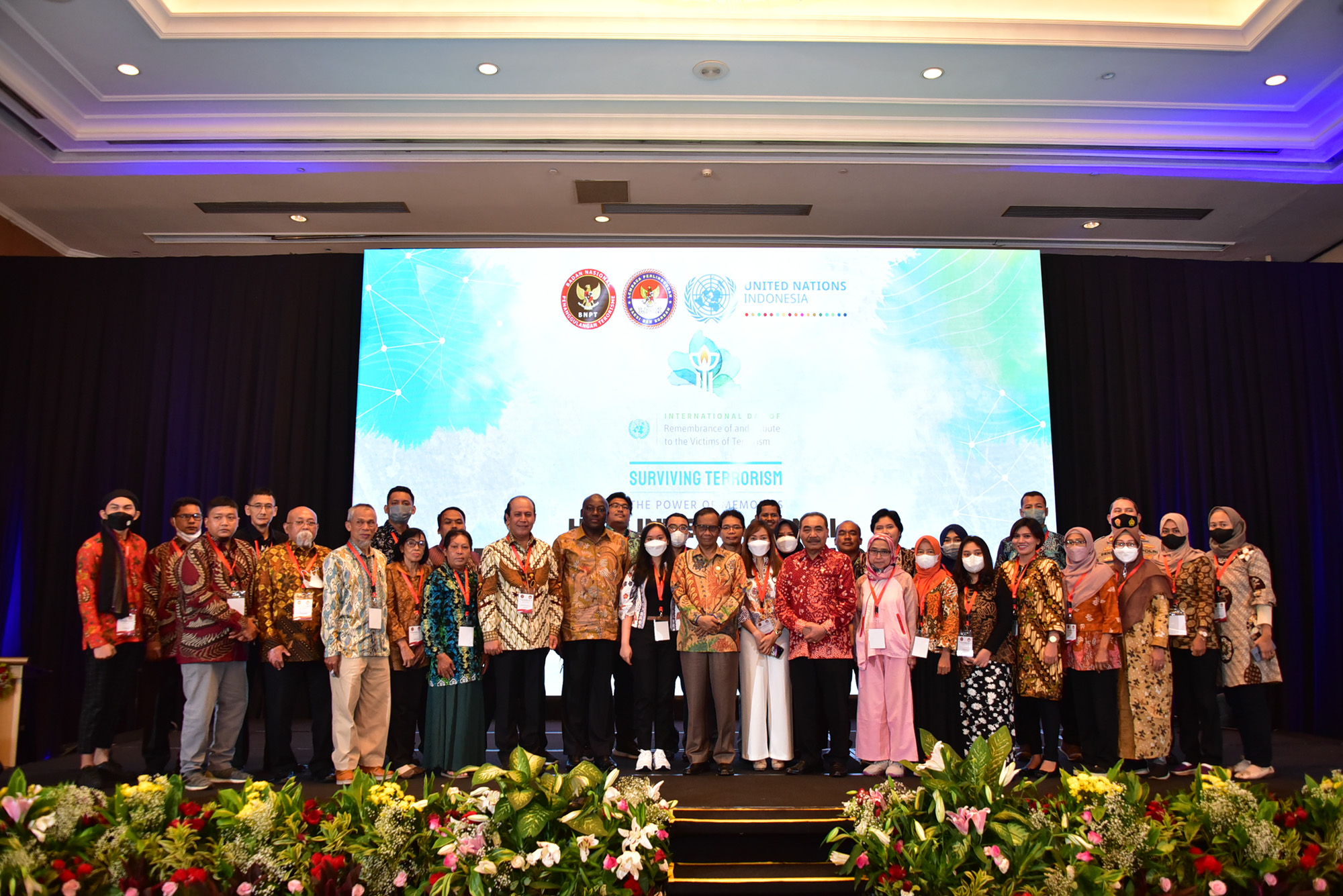 This year’s commemoration, the fifth International Day of Remembrance of and Tribute to the Victims of Terrorism, highlighted the theme of “Memories” – the power of memories and the importance of memories. “We are guided by, and pay deep respect to, the memories of the victims and survivors of terrorism. Whether they are the memories of those who we have lost or the memories held by those who are with us today.” said Ms. Valerie Julliand, United Nations Resident Coordinator in Indonesia. She added, “The memories we share and commemorate together today will raise awareness of the importance of preventing violent extremism that leads to terrorism”.

LPSK Chief Hasto Atmojo Suroyo said that the commemoration day for the victims and survivors of terrorism is an important occasion to ensure that the State always honor and fulfil the rights of the victims. “We are grateful that we are able provide compensation for victims of past terrorism incidents as mandated by Government Regulation no. 35/2020”, said Chief Hasto. Chief Hasto added that LPSK and BNPT has completed the facilitation for victim’s compensation in 2022. LPSK also established a programme called Penyintas Tangguh to engage more people, especially fellow survivors to join hand with LPSK to facilitate the provision of protection and rehabilitation supports for the victims.

Head of BNPT, Commissioner-General Police Boy Rafli Amar said that BNPT is strongly committed to taking comprehensive and sustainable measures to provide support for victims of terrorism. “BNPT has implemented several flagship programmes which involve the victims of terrorism over the past several years, as mandated by Law no. 5/2018 and Government Regulation no. 35/2022”, said Commissioner-General Boy. These programmes include Silaturahmi Kebangsaan, the development of a BNPT regulation on reconciliation between victims and former violent extremist prisoners, and various psychosocial rehabilitation support programmes.

The commemoration event was also attended by representatives of survivors from past terrorism incidents, diplomatic missions in Jakarta, UN agencies and civil society organisations. The event was supported by Guyub Project, an initiative to address the root causes of violent extremism in Indonesia.