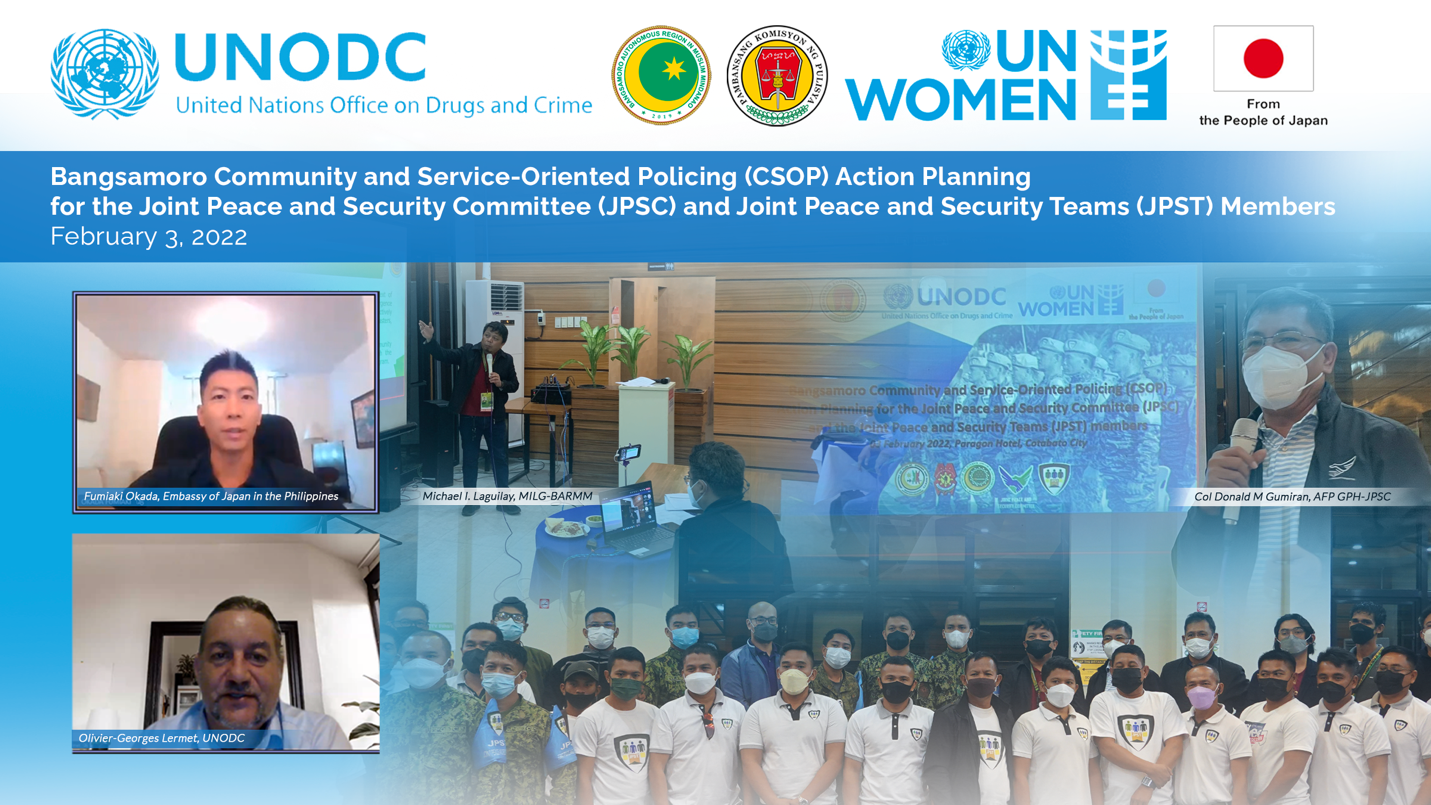 Cotabato City (Philippines), 3 February 2022—The United Nations Office on Drugs and Crime (UNODC) facilitated an action planning for the officials of the Bangsamoro Autonomous Region in Muslim Mindanao (BARMM), with support from the Japanese Government and UN Women, to advance peace normalization process in the region.

The action planning centered on setting mechanisms and activities towards executing community and service-oriented policing as a primary crime prevention strategy in BARMM.

This initiative takes off from the Localized Bangsamoro CSOP Framework adopted by the Ministry of the Interior and Local Government (MILG) that synergizes the following elements: awareness building, capacity-building, CSOP-informed activity planning and implementation, and monitoring and evaluation.

Senior Policy Advisor Olivier-Georges Lermet, joining the meeting via online, expressed the continued commitment of the UNODC to support normalization process in BARMM, noting that the Bangsamoro community policing efforts will foster greater partnership between and among the security sector, local government units , and civil society.

“Our work and journey ahead to achieve the desired change to improve the lives of the Bangsamoro people by establishing and sustaining peace through the effective implementation of the Bangsamoro CSOP has just started,” Lermet said.

Okada pointed out BARMM’s development through the Bangsamoro Transition Authority (BTA) in establishing administrative bodies and in transitioning into the democratic sphere supported by the rule of law and veering away from violence.

Chief of Public Safety Division Michael I. Laguilay of the MILG-BARMM detailed the Bangsamoro CSOP framework, which is reflective of the issues and concerns and the historical context of the Bangsamoro.

Said framework is aligned with the provisions in the signed peace agreements, such as mainstreaming of cultural and gender sensitivities, ensuring that the policing approach is more community-centric, and establishing local ownership of the policing framework that is at par with international community policing norms and standards.

Key initiatives of the Bangsamoro community policing include community outreach programs with the PNP, focused group discussions among law enforcers, civil society organizations, and community elders and leaders to understand the community and local practices, knowledge enhancement for PNP on Islamic teachings towards peace, reorientation on the role of civil society in the local peace and order councils (LPOCs), and production of information and education campaign (IEC) materials on the Bangsamoro Organic Law, among others.

AFP Col Donald M Gumiran of GPH-JPSC, in his closing message, thanked the active participation of JPST members and called for the alignment of all efforts and initiatives towards the full realization of the CSOP framework.

The implementation of the Bangsamoro CSOP as the localized crime prevention strategy empowers Bangsamoro stakeholders to effectively address peace and security issues in the region.