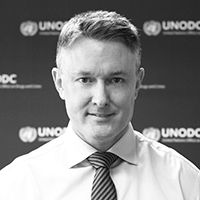 Jeremy Douglas is the Regional Representative of the United Nations Office on Drugs and Crime (UNODC) for Southeast Asia and the Pacific overseeing and managing operations and strategy from Myanmar to the Pacific in the areas of the rule of law, non-traditional security threats, law enforcement, criminal justice and drug-related supply and health issues. He is also the UNODC liaison to China, Korea, Japan and Mongolia and to regional organisations including the Association of Southeast Asian Nations (ASEAN) and the Pacific Islands Forum Secretariat (PIFS). Prior to his appointment as Regional Representative SEAP, he was the UNODC Representative in Pakistan from September 2009 - April 2013.

Between 2007 and 2009 Mr. Douglas was based in UNODC Headquarters in Vienna Austria as Manager of UNODC's Global SMART Programme which assists states to develop a evidence base for effective policy and operational responses to synthetic drugs and precursors. Prior to his time in UNODC HQ Mr. Douglas was a Regional Project Coordinator for UNODC in East Asia, managing a project covering ASEAN states and China.

Mr. Douglas has also worked with the United Nations in New York, the Management Board Secretariat of the Government of Ontario in Canada, and in the Caribbean. Mr. Douglas is a graduate of the London School of Economics in the United Kingdom and Bishop's University in Canada.