Trafficking in cultural property: organized crime and the theft of our past 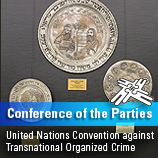 30 October 2012 - Transnational organized crime is often associated with cross-border activities such as trafficking in arms, drugs and human beings. This link is often overlooked, however, when it comes to the issue of trafficking in cultural property. While there is evidence of a substantial amount of looting around the world, actions to combat trafficking in cultural property have so far not matched either the gravity or the extent of the crime. Despite well-established agreements and legislation by bodies such as the United Nations Educational, Scientific and Cultural Organization (UNESCO) to curb the buying and selling of illegally excavated artefacts, it is only in recent years that international efforts to tackle the role of the organized criminal networks that perpetrate this crime have come to the fore.

Most recently, at the sixth session of the Conference of the Parties to the United Nations Convention against Transnational Organized Crime, held earlier this month in Vienna, trafficking in cultural property was recognized as an important aspect to be dealt with. A side event hosted by the Government of the United States discussed ongoing initiatives to counter this crime and provided insight into its work, while a session on technical assistance covered the important role of international cooperation in tackling this transnational concern. This focus on organized crime follows two previous intergovernmental expert group meetings (in 2009 and earlier in 2012) that were coordinated by UNODC.

Regrettably, in many source countries there is continuing evidence of widespread looting, often by organized gangs with clear hierarchical structures whose sole aim is to profit financially. Not only does this fuel transnational organized crime (given that most objects are transported internationally) but it also destroys the historical context of items and the ability to gather knowledge about the past and build an understanding of our collective history.  In addition, it has an immeasurable impact on the cultural identities of the source countries.

While the scale of this crime is extensive, the value of trafficking in cultural property is very difficult to quantify. As a highly clandestine crime, and one in which illegal items are invariably mixed with legal ones, it is difficult to distinguish between licit and illicit trade. It can, however, be argued that, given the attraction of criminals to lucrative markets, this area represents a big source of earnings for organized criminal groups.

With such groups increasingly involved in trafficking in cultural property, through both legitimate channels, such as auctions and the Internet, and underground illicit markets, this crime is a concern that affects all countries.

Evidence points to the interconnectedness of transnational organized crime, with networks employing the same routes and modi operandi to move cultural property as they use to move drugs, illicit arms and other materials. Trafficking in cultural property is also becoming an important source for the laundering of the proceeds of crime.

In response to trafficking in cultural property, UNODC works to harness the potential of the United Nations Convention against Transnational Organized Crime. Many of the provisions of the Convention are relevant in that regard and ultimately empower States parties to rally against transnational crime to protect their common cultural heritage.

UNODC also works in other ways, on the ground, to counter this threat. In 2003, UNODC established the Container Control Programme in partnership with the World Customs Organization. While initially established to help countries intercept drug shipments, the programme has increasingly assisted in identifying illegal movements of other goods, including cultural property. Officers who had been trained as part of the programme were recently able to seize, among other items, two seventeenth- and eighteenth-century canons that had been stolen from the UNESCO World Heritage Site Fort of San Lorenzo in Panama (and which were illegally declared as scrap metal). In the same container, four century-old railroad wheels from the first Panama Canal railroad were discovered being illegally removed. As with the vast amount of other items stolen each and every year, the theft of these artefacts would have represented a historical loss for not only the citizens of the country concerned, but also for humankind in general.