New report looks at use of cocaine paste in Peru 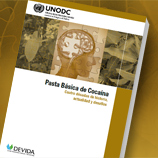 17 May 2013 - A new UNODC report has analyzed for the first time the problem and impact in Peru of pasta basica de cocaína - cocaine paste, PBC, pasta, basuco, pitillo or paco as it is commonly known in parts of South America -since its appearance more than four decades ago. The abuse of PBC leads to serious dependence, and has become a growing problem in Peru and many South American countries.

PBC is an intermediary product in the manufacture of cocaine, where coca leaves are mixed with industrial chemicals and solvents, such as sulphuric acid and kerosene. Abusers typically smoke PBC, and the drug generates severe physical and psychological dependence within weeks of use, making it much more complex and difficult to treat than opiate use. PBC use further induces psychosis and exposes users to a series of health risks, such as shortness of breath, heart attack, brain damage, infections as well as anti-social and even criminal behaviour. In parts of South America, PBC use has created serious challenges for public health systems.

Readily available and relatively low-cost, PBC use carries the risk of creating a potentially explosive health epidemic with severe social consequences. The report, produced by UNODC and the Peruvian DEVIDA (National Drug Commission), shows that in Peru six out of ten PBC users develop drug dependence problems. It found that, among juvenile offenders in the country, 21.8% declared high prevalence of PBC use, and with the beginning age of consumption as early as 13, the potential for large-scale dependence is high. Further, previously considered a 'poor man's drug' due its low-cost, PBC usage is no longer concentrated among low income users, as during the last two decades the number of affluent users has increased.

The report was produced with the aim of increasing knowledge about the use of PBC and its implications for Peruvian society in order to inform strategies to promote prevention and treatment policies in the country. "Illicit drug use and dependence are a public health concern" said UNODC Representative in Peru Flavio Mirella. "Given the scale of the PBC problem in Peru, we encourage the Government and its partners to design prevention strategies to discourage its use and to make available treatment options that respect human rights and are designed according to the needs of addicts", he concluded.