With massive support, UNODC spreads its message against human trafficking all over the world 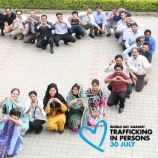 6 August 2014 - On 30 July, UNODC marked the first World Day against Trafficking in Persons with activities across the globe to raise awareness about this heinous crime. These activities highlighted the plight of victims of human trafficking, aided by a UNODC social media campaign entitled #igivehope.

The campaign encouraged people worldwide to express their solidarity with the victims of human trafficking wherever they may be. People were asked to share photos of themselves online making the universally recognized hand heart - a gesture of solidarity representing love, care and friendship.

Media organizations, such as USA network, rallied support from its community of TV actors - most noticeably the stars of shows like Graceland, Suits, Covert Affairs and Royal Pains - to promote the World Day's messages. Other celebrities, like actress Jada Pinkett-Smith, pianist Chloe Flower and singer Nicole Scherzinger, supported the hand heart campaign by sharing their photos with millions of their fans. UN Messengers of Peace, such as Chinese pianist Lang Lang, participated as well.

On the social media front, a Thunderclap - a coordinated message launched collectively across Twitter, Facebook and Tumblr on 30 July - reached over 5.5 million people. Together with the #igivehope hashtag, many supporting organizations and thousands of people shared key messages to highlight the plight of victims: for instance, that more than a quarter of the victims are children, and that women and girls make up close to 60 per cent of victims globally.

Events were also held across the world by both UNODC and others. Here is a small selection of the many related activities that took place during the World Day against Trafficking in Persons:

Brazil: Blue is the colour of the fight against human trafficking 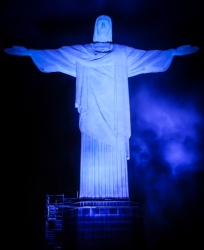 The Christ the Redeemer statue in Rio de Janeiro, the esplanade of Government ministries in Brasilia and the Botanical Garden in Curitiba were some of the landmarks around Brazil lit in blue to mark the World Day against Trafficking in Persons. Marking the beginning of the National Week of Mobilization for Combating Trafficking in Persons in the country, the iconic Rio statue was floodlit in blue - the colour of the UN's Blue Heart Campaign. After a ceremony in which religious, government, and civil society representatives participated, UNODC presented a report with brand new data about human trafficking in Brazil, which consolidates information from various sources, including social services, public safety and criminal justice offices.

Colombia: Giving a voice to survivors of human trafficking 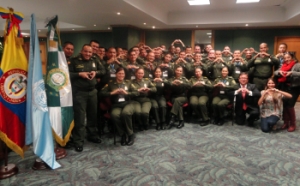 Colombia joined the observance of the World Day with an international meeting to give a voice to survivors of human trafficking, co-organized in Cali by the Interior Ministry, the Marcela Loaiza Foundation and UNODC, and supported by the International Organization for Migration. The meeting was attended by about 300 people, the local media and public officials involved in combating human trafficking. During the event, Juan Manuel Santos,  President of Colombia, said: "We are giving this fight a holistic approach, where apart from arming ourselves with the tools needed for identification, investigation and prosecution purposes, we are giving a leading role to prevention, protection, and publicizing possible cases, and, of course, to the assistance of victims." 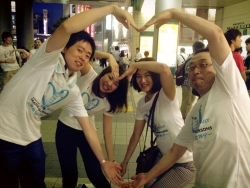 As an example of what civil society organized for the World Day, Lighthouse, a Japanese organization working to combat human trafficking, staged an awareness-raising event in one of the busiest spots in Tokyo, the Shibuya train station. By disseminating the Blue Heart Campaign messages this event also helped to draw attention to the plight of human trafficking victims in the country. 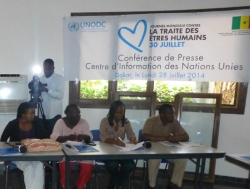 The UN Information Centre in Dakar marked the World Day against Trafficking in Persons with an event where officials from UNODC, the UN Office of the High Commissioner for Human Rights (OHCHR), the Senegalese Task force against Trafficking in Persons, and civil society participated. The event, covered extensively by local media, offered a significant opportunity to shed light on the main trends of human trafficking in West Africa, and to present the challenges and opportunities related to tackling this crime. 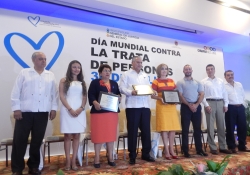 An event was held in the southern state of Chiapas, Mexico, where local government officials were recognized by UNODC for their efforts in the prosecution and prevention of human trafficking. Additional activities such as a training course on human trafficking and a Blue Heart-themed walk through the capital of Chiapas - Tuxtla Gutiérrez - were organized in observance of the World Day.

2014 World Day Against Trafficking in Persons