Closing the gap on HIV and AIDS 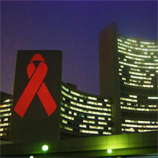 1 December 2014 - Today, UNODC commemorates World AIDS Day by remembering those affected by HIV in the last three decades and by renewing our pledges to end AIDS. Although we have made great strides in the last thirty years and the figures constantly improve - less people are dying and getting infected, and those infected have greater access to antiretroviral therapy than ever - some people have been left behind. A gap in the response has affected key populations, such as people who inject drugs and people in prisons.

As part of the many global activities for the World AIDS Day, the headquarters of UNODC in Vienna lit up with the AIDS Ribbon, a symbol of support in the efforts to end HIV/AIDS by 2030. In his statement on the World Day, UNODC Executive Director Yury Fedotov said "The UNAIDS campaign calls on everyone to empower and enable people everywhere to receive the evidence-based prevention and treatment they need. This means a level playing field for everyone by closing the testing, treatment and prevention access gaps". 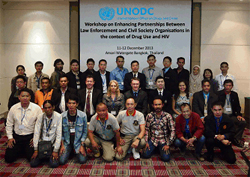 UNODC has so far organized workshops in nineteen of the twenty-four high priority countries affected by HIV through injecting drug use - enabling hundreds of law enforcement officials, civil society organization (CSOs) members and government agency representatives to discuss the best approaches in tackling HIV and AIDS. Additionally to building awareness, the aim of these workshops is to develop the strategies to best meet the needs of people who use drugs and the way each of these actors can implement a response.

Law enforcement officials frequently interact with people who inject drugs. In order to strengthen their role in protecting and promoting public health and human rights, UNODC's long-term strategy is to build effective partnerships between law enforcement agencies, public health and social welfare entities, and CSOs. The overall aim is to increase access to evidence-based harm reduction services for people who inject drugs.

In addition to the workshops, in 2014 UNODC unveiled the Training Manual for Law Enforcement Officials on HIV service provision for people who inject drugs. It is designed to raise awareness of stigma and discrimination as a major barrier to HIV prevention, treatment and care among key populations. Additionally, the manual highlights various approaches of human rights based policing models.

Strengthening the partnership between all relevant actors has the potential to curb HIV/AIDS and considerably close the gap between those who have access to HIV testing, prevention and treatment services and those who have not. To close this gap, we need to empower the communities left behind and equip law enforcement bodies with the knowledge and tools to become positive change agents in the community.

Stories from India and Nigeria on HIV prevention and care