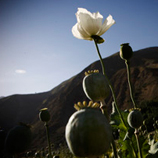 The UNODC chief highlighted the urgent need to address the growing problem of domestic drug consumption. "There are more than one million opiate addicts in Afghanistan, which represents a national tragedy. We must provide more support to these people, many of them women and children, through continued work in the area of drug treatment and prevention," he said.

Minister Rashidi, speaking after the meeting, said: "I am determined to continue with the fight against narcotics, but without the increased commitment and efforts of the international community, it will be difficult to achieve lasting success."

Mr. Fedotov said the results of the Afghan Opium Survey 2013 were "disappointing". but noted positive achievements in strengthening the Afghan counter-narcotics agencies, as well as regional drug seizures and greater coordination among nations countering opiates.

"Although the Afghan government can be encouraged by an increase in its eradication campaign, and the fact that 90 per cent of all cultivation occurs in only 9 provinces, the illicit drug trade remains a major threat," said Mr. Fedotov.

"For too long the threats of illicit drugs, crime and corruption have been neglected in efforts to shore up the security and stability of Afghanistan. We need to ensure that these issues are made national priorities."

He added that alternative livelihoods programmes for farmers involved in the illicit trade could only truly succeed when they had the markets and the necessary infrastructure to sell their crops.