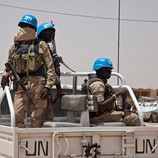 09 July 2014 - UNODC Executive Director, Yury Fedotov, said that his joint mission to Mali, alongside the head of the Department of Peacekeeping Operations (DPKO), Hervé Ladsous, sends a clear message that countering drugs, crime, corruption and terrorism is essential to building peace and development in the country and region.

In comments made at the end of their joint mission, Mr. Fedotov praised the efforts of the Malian government and the excellent cooperation between UNODC and DPKO in Mali and West Africa. "UNODC and DPKO have forged a close collaboration that capitalizes on each organizations' mandates and experience, but also views peacekeeping and fighting drugs and organized crime as interconnected issues calling for joint responses."

He also welcomed the work of the Special Representative of the Secretary-General and Head of MINUSMA, Albert Koenders. "The Special Representative is assisting the government of Mali to create peace and security in the country, with the aim of bringing the Malian crisis to an end. UNODC's efforts with the Malian government, alongside its partners, is contributing to this overall approach," he said.

Fighting in Mali and the 2012 coup in Guinea Bissau have made both countries increasingly  vulnerable to drugs and crime, said Mr. Fedotov and he pointed to growing fears over possible links between criminals and terrorist groups.

To meet these complex challenges, Mr. Fedotov said UNODC had, together with Chad, Mauritania, Burkina Faso, Mali, Niger, Libya, Algeria and Morocco, drafted a targeted strategy for the Sahel region  to strengthen legal regimes and promote judicial actors at the national and regional levels.

During the two-day mission, Mr. Fedotov and Mr. Ladsous met with Prime Minister Moussa Mara to discuss how UNODC can continue to support the Malian government's efforts against the groups involved in drugs, corruption and terrorism.

Also present were the Minister of Interior and Security, General Sada Samaké, Minister of Defence, Soumeylou Boubèye Maïga and senior officials from the Ministries of Foreign Affairs and Justice and Human Rights.

Both Mr. Fedotov and Mr. Ladsous  met with the MINUSMA Task Force on Organized Crime, and the Deputy SRSG for MINUSMA, David Gressly to define the UN's joint support to the Government.