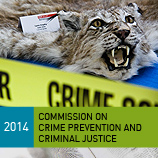 13 May 2014 - Urging the international community to "come together at the highest political level" to halt the escalation of wildlife and forest crime, Yury Fedotov, Executive Director of the United Nations Office on Drugs and Crime (UNODC) said that the US$8-US$10 billion reaped annually from this ruthless trade ranked it alongside the trafficking of human beings, arms and drugs in terms of illicit profits.  At a special event taking place today on the margins of the 23  rd session of the Commission on Crime Prevention and Criminal Justice, Mr Fedotov warned:  "The rate of poaching is such, that a number of iconic and lesser known species risk being wiped out over the next decade - and we will all bear responsibility for those losses."

Mr. Fedotov stressed that the illegal wildlife trade needed to be recognized everywhere for what it is: a very serious transnational organized crime requiring effective legislation and criminal justice systems. The London Conference that took place in February 2014 had added to the political commitments expressed in Paris, Gaborone, Marrakesh and Bishkek in 2013.  "We must now translate our resolve into concrete action and channel this momentum into the General Assembly," the UNODC head stated.

Stemming this tragedy is a shared responsibility, said Mr. Fedotov. UNODC is therefore working with Governments and partners, such as the International Consortium on Combating Wild Life Crime (ICCWC), to improve legislation, strengthen law enforcement and criminal justice systems that can investigate, prosecute and sentence criminals in source countries and end-markets, and forge closer international cooperation.

UNODC will soon be launching the Global Programme for Combating Wildlife and Forest Crime. The Programme will deliver regional and national assistance to support law-enforcement responses, put in place legislation to address this crime, strengthen investigative, prosecutorial and judicial capacities, as well as combat the related issues of money-laundering and corruption.  The Programme will also support States in their efforts to introduce livelihoods to affected communities. 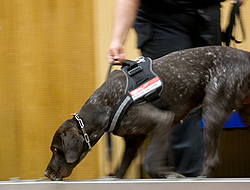 Mr. Jochen Danninger, Austrian State Secretary of Finance and Customs, introduced a practical demonstration of a search conducted by a canine squad. Earlier, the Executive Director and the State Secretary inaugurated an exhibition on illicit wildlife products seized by Austrian customs.  Mr. Danninger explained that Austria had two sniffer dogs working at Vienna airport trained to detect specimens protected by the  Convention on International Trade in Endangered Species of Wild Fauna and Flora (CITES). Both dogs have been trained with the support of Vienna's Schönbrunn zoo.  Illustrating their effectiveness in intercepting smuggled species, he said, "Last June, one dog became very interested in the luggage of a passenger arriving from Bali. When the luggage was inspected by customs they found 60 smuggled birds, 21 of them protected by CITES. The passenger had no documents for the birds and the animals had been transported under very poor and not species-appropriate conditions. Some of the birds were packed in cardboard rolls. The result was that 37 birds were already dead on arrival."

Law enforcement alone cannot eliminate the problem of wildlife crime, said Mr. Fedotov, underlining the need to tackle the underlying development dimension. Education and public awareness campaigns were needed to reduce the demand for protected fauna and flora, together with efforts to promote sustainable livelihoods for communities in source countries, where poverty and their lack of economic opportunities drive many to engage in this criminal enterprise.

Mr. Fedotov said he hoped that more countries would implement the UNODC Wildlife and Forest Crime Analytic Toolkit developed with ICCWC to assess countries' preventive and criminal justice responses to wildlife and forest crime, following the example of Gabon, Nepal, Bangladesh and Peru.

Other initiatives of UNODC include the recent "Be a responsible traveller" campaign jointly launched with the UN World Tourism Organization to curb demand for wild animals, exotic plants and endangered wood products.