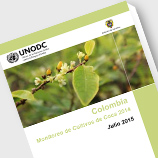 2 July 2015 - The latest Colombia Coca Survey, produced by UNODC jointly with the Colombian Government, was released today showing that the country's cultivation area and cocaine production both increased substantially in 2014 compared to the previous year. The Survey notes that the net coca cultivation area was up 44 per cent year-on-year from 48,000 hectares in 2013 to 69,000 a year later, while the potential cocaine production, in turn, rose from 290 to 442 metric tons in the same period representing a 52 per cent increase.

The annual Survey is based on images collected by satellite, and includes all data regarding cultivation and eradication efforts in Colombia. This year's Survey indicates that while the cultivation area of coca bush decreased in some Colombian regions (Amazon, Orinoco and Sierra Nevada), it rose in others (Pacific, Central, Putumayo-Caquetá and Meta-Guaviare). In the latter, coca crops grew strongly in two national parks, namely La Macarena and Nukak. The presence of coca also increased in Afro-Colombian and indigenous areas. A noteworthy regional increase in coca cultivation area took place in the Putumayo-Caquetá region, which saw a growth of 68 per cent - increasing from some 12,000 ha to more than 20,000 ha - while the region with the biggest cultivated area, the Pacific, registered an increase of 40 percent, from close to 18,600 ha to almost 26,000 ha.

The value of coca leaf production and coca derived farm products (coca paste and cocaine base) also climbed by 40 per cent, from $292 million in 2013 to $408 million in 2014. This is the equivalent of 0.3 per cent of Colombia's GDP and three per cent of the share of GDP related to agriculture.

Speaking at today's Survey launch in Bogotá, Bo Mathiasen, UNODC Representative in Colombia, noted: "Illicit crops have not brought positive development to communities anywhere in the world. For this reason UNODC encourages the Government of Colombia to maintain and increase the alternative development programme in the country."

Over the past 11 years, Colombia's alternative development projects - which are aimed at developing alternative sources of income for farmers dependent on illicit drug cultivation - have positively impacted nearly 180,000 families. Through this strategy, these families have improved their quality of life and obtained a licit source of income. Alternative development is therefore not only useful to counter coca crops, but also other illicit activities which threaten the country's most vulnerable regions.

Note: Some figures from 2013 have been revised after the publication of last's year Survey to reflect new information that became available after publication.