In closing the 58th Session of the CND, UNODC Chief calls for evidence-based practices in drug use treatment 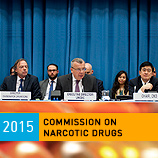 17 March 2015 - Evidence-based practices are the best means of preventing and treating drug abuse and ending the misery of millions of people, UNODC Executive Director Yury Fedotov said today in Vienna.

The UNODC Chief was speaking at the closing of the 58th Session of the Commission on Narcotic Drugs (CND), which drew around 1,000 participants made up of national delegations, civil society, inter-governmental organizations and the media.

Speaking about assistance and support to drug users, Mr. Fedotov said, "We must remove the damaging influence of ideology and provide assistance solely on the basis of science and research."

Mr. Fedotov noted in his speech that the resolutions and decision made by the CND, the key policymaking body on international drug control, gave UNODC additional guidance and mandates. "Resolutions," he said, "are a platform for UNODC's own projects and programmes around the world. They enable the organization to deliver tangible benefits and assistance to the victims of illicit drugs."

During the nine days of the Commission, 11 resolutions and one decision were passed on matters such as protecting young people and children from the sale of illicit drugs and new psychoactive substances (NPS) over the Internet, and strengthening cooperation in identifying and blocking financial flows linked to drug trafficking.

Mr. Fedotov closed his speech on the subject of the Special Session of the UN General Assembly on the World Drug Problem (UNGASS 2016), which is to be held in New York in April 2016. He said, "We are now coming to the point on our collective journey where UNGASS 2016 is now firmly in view. Thanks to [the delegates'] deliberations and collective vision we are already well prepared, but there remains considerable work to be done."