Assisting States in their efforts against cybercrime 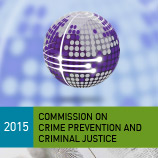 20 May 2015 - During a side event at the 24th Commission on Crime Prevention and Criminal Justice (CCPCJ), UNODC launched the cybercrime repository - a database of legislation, case law and lessons learned on cybercrime and electronic evidence. This tool will assist countries in their efforts to prevent and effectively prosecute cybercriminals.

At the launch, Loide Lungameni, Chief of UNODC's Organized Crime Branch, noted that this new database is the only currently available global tool which contains laws, cases and lessons learned on cybercrime and electronic evidence. "The repository enables lawmakers to draw upon the database of legislation when drafting laws on cybercrime or electronic evidence; it facilitates international cooperation by helping law enforcement and prosecutors to identify cybercrime legislative provisions applicable in other States; and it provides users with examples of good practices in the prevention, investigation and prosecution of cybercrime."

The new tool was developed following a call from the 22nd CCPCJ for broader technical assistance efforts and deeper international cooperation in order to assist countries to enhance their capacities and responses against cybercrime. In this, UNODC manages the central data repository of cybercrime laws and lessons learned, aiming to better assess the needs and criminal justice capabilities, and the delivery and coordination of technical assistance in this area.

The repository comprises three parts which aim to facilitate States' efforts against cybercrime: