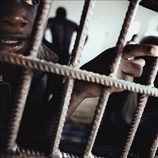 20 November 2015 - The Universal Children's Day is dedicated to promoting the well-being and human rights of the world's children, especially those suffering the impacts of poverty, armed conflict, discrimination and exploitation. The date of the observance -- 20 November -- marks the day on which, in 1989, the United Nations General Assembly adopted the Convention on the Rights of the Child. Today, we reaffirm our obligation to do everything in our power to enable all children to survive and thrive, learn and grow, have their voices heard and reach their full potential.

This year, I wish to emphasize the importance of ensuring that the commitments made by the international community to the world's children are extended to a group of children who are often forgotten or overlooked: those deprived of their liberty.

Far too many children languish in jail, mental health facilities or through other forms of detention. Some children are vulnerable because they are migrants, asylum seekers, homeless or preyed on by organized criminals. Whatever the circumstances, the Convention dictates that the deprivation of liberty must be a measure of last resort, and for the shortest time. Our aim must be to pursue the best interests of the child, prevent the deprivation of liberty and promote alternatives to detention.

With that in mind, and further to a request by the General Assembly, the United Nations is preparing a Global Study that aims to shine a light on the scale and conditions of children deprived of their liberty and secure the protection of their rights. The study will gather relevant data, identify good practices and help countries grasp the worrisome magnitude of the phenomenon and design measures to address it. A coalition of UN actors has come together to assemble resources and expertise to take the study forward. I strongly support this effort and urge Member States to do so as well.

This year's observance falls at a time when 60 million people have been forcibly displaced from their homes - more than at any time since the Second World War. Almost half of them are children fleeing oppression, terrorism, violence and other violations of their human rights. This observance also comes following the landmark adoption of the 2030 Agenda for Sustainable Development, which can point the way towards peaceful, prosperous and inclusive societies for all. Achieving the Sustainable Development Goals will depend crucially on reaching the most vulnerable children.

On Universal Children's Day, let us reaffirm our commitment to a future in which no child is left behind, including those deprived of their liberty.

UNODC and its work on Justice for Children