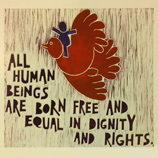 29 September 2015 - UNODC, together with several other United Nations agencies, has called on Member States to act urgently in ending violence and discrimination against lesbian, gay, bisexual, transgender and intersex (LGBTI) adults, adolescents and children.

A statement issued jointly today by 12 agencies, comprising UNODC, ILO, OHCHR, UNAIDS, UNDP, UNESCO, UNFPA, UNHCR, UNICEF, UN Women, WFP and WHO, stated that all people have an equal right to live free from violence, persecution, discrimination and stigma. The statement also points to international human rights law which establishes legal obligations on States to ensure that every person, without distinction, can enjoy these rights.

"This statement is about supporting Member States to address violence and discrimination and uphold the fundamental human rights of LGBTI people by addressing the legal and policy barriers that make them vulnerable to many challenges, including their access to and uptake of HIV and other health services," said UNODC Deputy Executive Director and Global Coordinator for HIV/AIDS, Aldo Lale-Demoz.

The joint statement also mentions that failure to uphold the human rights of LGBTI people and protect them against abuses, such as violence and discriminatory laws and practices, would impact negatively on progress towards achieving the newly adopted Sustainable Development Goals. While welcoming increasing efforts in many countries to protect the rights of LGBTI people, the agencies stated that they remain seriously concerned with how millions of LGBTI individuals, those perceived as LGBTI, and their families, face widespread human rights violations around the world.