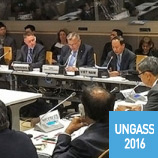 19 April 2016 - At a high-level briefing on the margins of the UN General Assembly Special Session on the world drug problem (UNGASS), Mekong countries and UNODC informed the international community on the current drug situation in the region. At their briefing in New York on Tuesday, they also gave an overview of the relevance of the Mekong Memorandum of Understanding (MOU) on Drug Control - a framework that incorporates law enforcement, criminal justice, alternative development, and health responses.

The MOU brings together six countries - Cambodia, China, Lao People's Democratic Republic, Myanmar, Thailand and Viet Nam - which stated that more needs to be done given the scale of illicit drug production, trafficking and use they are confronted with.

The region - incorporating the well-known Golden Triangle - has long been known for opium and heroin, and there is still a significant level of cultivation and production in Myanmar and Lao People's Democratic Republic. However, it has also become one of the largest synthetic drug markets in the world, where methamphetamine in pill and crystal forms are common. The diversion and trafficking of precursor chemicals, and the emergence of new synthetic drugs are also a challenge.

The varied types and sheer volume of illicit drugs being trafficked highlights in the Mekong the scale of the problem being faced. "The Mekong is a distinctive drug market, with multifaceted challenges that require multifaceted solutions", said Mr. Jeremy Douglas, UNODC's Regional Representative for Southeast Asia and the Pacific. "It is encouraging to engage policy makers as they reflect on how well past plans have worked, considering data and formulating responses."

The mechanism has also started a review process to ensure MOU partners and UNODC identify challenges as they arise. This allows the countries to adapt and respond to the changing dynamics of the regional drug market, and is an integral element of the Mekong MOU going forward.

"The evolution of the Mekong MOU into an effective multilateral framework for cooperation and collaboration is underpinned by an understanding of the need for solutions with nuanced geographical considerations," said Mr. Douglas. "This includes recognition that effective solutions need to go beyond transnational law enforcement initiatives and incorporate judicial, development and health considerations."

"We are working to improve responses", said Mr. Tun Nay Soe, head of drug analysis and programming at UNODC's Regional Office for Southeast Asia and the Pacific. "But importantly, these improvements have consistently and increasingly incorporated community and individual health considerations, and stem from the viewpoint that enforcement alone has not yielded the desired results."

UNODC in Souteast Asia and the Pacific