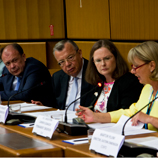 Acknowledging that the international community was also struggling with the biggest refugee and migration crisis since the Second World War, Mr. Fedotov said: "Armed conflicts and humanitarian crises expose those caught in the crossfire to increased risk of being trafficked for sexual exploitation, forced labour, organ removal, servitude and other forms of slavery."

Mr. Fedotov said UNODC's new Global Report on Trafficking in Persons, to be released later this year, would show the link between human trafficking and refugee flows from countries, including Syria and Eritrea and involving refugees from Myanmar and Bangladesh.

Turning to what the international community can do to eliminate human trafficking the UNODC Chief noted that "for too long, migrant smugglers and human traffickers have gone about their business with impunity".

"But," he said, "we know how to fight this fight." Mr. Fedotov called on the international community to stop human traffickers and migrant smugglers as part of the coordinated response to the refugee crisis and migration challenge.

He urged governments to ratify and implement the UN Convention against Transnational Organized Crime, and its protocols on human trafficking and migrant smuggling.

Countries must also show greater willingness to use mutual legal assistance and extradition to ensure that the alleged criminals cannot escape justice by simply crossing borders, he said.

There was also a need for greater contributions to the UN Voluntary Trust Fund for Victims of Trafficking in Persons. Mr. Fedotov also stressed that the UN Summit for Refugees and Migrants in September this year offered an opportunity to reinforce all of these efforts.

The special event on human trafficking marked World Day against Trafficking in Persons, which is held every year on 30 July.

UNODC's work on Trafficking in Persons and Smuggling of Migrants

Global Action against Trafficking in Persons and Migrant Smuggling (GLO.ACT)