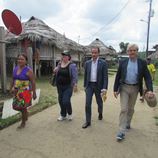 30 June 2016 - In the context of the project "Consolidation of the Criminal Procedure Reform in Panama", the President of the Supreme Court of Justice of Panama, José Eduardo Ayú Prado Canals, the UNODC Director for Policy Analysis and Public Affairs, Jean-Luc Lemahieu, and the UNODC ROPAN Representative, Amado Philip de Andrés, visited selected Panamanian indigenous locations in Darién and Guna Yala to observe firsthand the way in which the transition towards the implementation of the Adversarial System is improving the delivery of justice in these areas. Particular emphasis was made on the enhanced roles of Judges and Prosecutors under the new model, as well as the establishment of synergies and synchronization mechanisms between the formal and the indigenous traditional Justice Systems.

Since 2011, through a number of different national and regional initiatives, UNODC has been supporting Panamanian institutions in the transition towards the Adversarial System, providing technical assistance and training. Three years later, in October 2014, the Judiciary of Panama and UNODC signed project "Consolidation of the Criminal Procedure Reform in Panama" to ensure the timely completion of this reform in the two judicial districts that concentrate the largest population and present the highest crime rates nation-wide.

Relevant facts on the implementation of the Adversarial System in Panama:

UNODC Office for Central America and the Caribbean