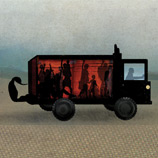 22 November 2016 - #ADeadlyBusiness, a UNODC campaign to prevent and combat migrant smuggling, was adopted yesterday by eleven countries in the Americas as a regional communication initiative within the framework of the XX Regional Conference on Migration (RCM). UNODC's Office in Mexico originally developed #ADeadlyBusiness and it was in that country where the campaign was endorsed for the first time.

At the meeting, UNODC Programme Management Officer Felipe De La Torre explained that the initiative followed a participatory, inclusive and comprehensive process and that it was enriched with the support of approximately 300 public officials and members of the civil society. Mr. De La Torre further added that, while using an original creative line, universal characters and contexts, as well as simple but strong messages, #ADeadlyBusiness is underpinned by four main objectives:

The RCM is an intergovernmental forum of eleven countries devoted to sharing information and promoting dialogue on migration at the highest level. Members include Belize, Canada, Costa Rica, the Dominican Republic, El Salvador, Guatemala, Honduras, Mexico, Nicaragua, Panama and the United States of America. The #ADeadlyBusiness campaign was thus presented to the participating countries during a session on extra-regional migratory flows, in which States agreed to request UNODC's support to jointly promote the campaign.

All the communication tools of #ADeadlyBusiness were developed in Spanish and translated into Arabic, English, French and Portuguese. Through a range of products, including posters, videos, a toolkit, infographics and radio spots, the campaign illustrates each of the smuggling methods used by criminals, covering land, sea and air.

The campaign was developed within a regional project, "Promotion of international cooperation between Mexico and Central America to prevent and combat the smuggling of migrants," which has been operating since 2013, and supported by the European Union.