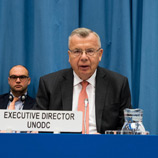 17 October 2016 - The negative impact of transnational organized crime on health, livelihoods, institutions, governance and the rule of law is indisputable, said the head of UNODC, Yury Fedotov, today.

Speaking at the eighth session's opening, the Executive Director said: "The international community has repeatedly recognized that the Convention and its three protocols on human trafficking, migrant smuggling and firearms are more relevant than ever to address urgent global challenges."

These threats included the complex problem of the growing nexus between transnational organized crime and terrorism.

Mr. Fedotov said the 2030 Agenda for Sustainable Development acknowledged that confronting crime and promoting the rule of law were essential to the achievement of the sustainable development goals.

"Targets under many of the SDGs address human trafficking and forced labour, drug and wildlife trafficking, and illicit financial and arms flows, as well as the recovery and return of stolen assets," said the UNODC Chief.

Crime's negative impact was also underscored in the Doha Declaration from the Thirteenth Crime Congress and at April's UN General Assembly Special Session on the world drug problem, as well as in the New York Declaration of September's Summit for Refugees and Migrants.

With 187 parties to the convention, and with similar numbers for the ratification of its protocols, UNTOC represented a "near-universal framework to address these challenges and thereby support peace, security, safety and development", Mr. Fedotov said.

UNODC was working hard to highlight the Convention's unique value in addressing new and emerging crimes, but he said implementation represented a distinct challenge and there was a need to "shore up" gaps.

"For justice to be truly for all, we need to make better use of the tools provided by the Convention and protocols, work together, share responsibility and acknowledge that we can and must do more," said Mr. Fedotov.

Held every two years, the Conference of the Parties to the UN Convention Against Transnational Organized Crime attracts some 800 participants drawn from Member States, ministries and civil society.