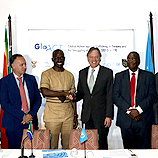 26 September 2016 - Earlier this year, the Global Action to Prevent and Address Trafficking in Persons and the Smuggling of Migrants (GLO.ACT), an initiative from UNODC, the International Organization for Migration (IOM) and the United Nations Children Fund (UNICEF), in partnership with the European Union (EU), was launched globally. This programme forms part of a joint response to assist countries to develop and implement effective responses to trafficking in persons and the smuggling of migrants and focuses its efforts on assistance to governmental authorities, civil society organizations, victims of trafficking and smuggled migrants.

In this context, and following up on the spirit of last week's meeting on Large Movements of Migrants and Refugees which took place during the General Assembly in New York, UNODC and the South African Ministry of Home Affairs launched GLO.ACT in the country. South Africa is one of 13 countries selected to participate in this effort, in part due to its importance as a source, transit, and destination country for both trafficking in persons and smuggling of migrants. The launch of the cooperation programme focused on the globalized nature of these crimes and their devastating impact on shared communities.

At the launch ceremony, South Africa's Minister of Home Affairs, Malusi Gigaba, welcomed this partnership, which aims to address the "twin scourge of trafficking in persons and smuggling of migrants, which too often leads to death and exploitation." He further appealed to regional partners not to turn a blind eye as "offenders undermine and evade law enforcement, criminal justice, and social welfare systems." Mr. Gigaba added that often powerful and well-resourced interests do not take these crimes seriously enough, as their own children and women are not as vulnerable as those of the poor and working classes. "When questioned they reply, 'what is the rate of child or women trafficking?', as if to suggest that one person smuggled or trafficked is an acceptable figure," he said.

For his part, UNODC Deputy Executive Director Aldo Lale-Demoz emphasized that there is no region that is not affected by trafficking in persons or migrant smuggling. "On trafficking in persons alone, UNODC has identified at least 510 flows worldwide, and has collected data on victims with 152 different citizenships, " he said. Mr. Lale-Demoz situated GLO.ACT directly in the Sustainable Development Agenda - specifically Target 8.7 calling for the "eradication of forced labour and human trafficking", and Target 10.7 for the "facilitation of orderly, safe, regular and responsible migration." He also noted that the critical factor for the success of GLO.ACT is the engagement of Member States, and commended South Africa for its efforts to address human trafficking and migrant smuggling.

In their interventions, the joint programme's partners focused on the importance of multidisciplinary engagement and strategic cooperation. Josiah Ogina, IOM's Regional Representative, linked GLO.ACT to the Migration Dialogue for Southern Africa (MIDSA), a regional collaboration initiative between the IOM and the Southern African Migration Project (SAMP) aiming to bring together senior officials to discuss and agree on migration-related issues of regional concern. He also commended South Africa for having existing legislation and strong initiatives on which to build and thanked the EU for recognizing the need to protect victims. Yulia Krieger, Deputy Representative of UNICEF in South Africa, praised the global initiative for working to mainstream child protection in its work, and emphasized that the level of care provided to children must not be influenced by their possible migratory status.

Furthermore, Manuel Iglesias Roa, First Counsellor of the EU Delegation to South Africa, highlighted similarities between the EU and the Southern African Development Community (SADC) in the challenges they face in terms of migration, and expected the EU's contribution to strengthen the "protection, support and assistance to victims, especially women and children" within the programme, while having the hope that GLO.ACT would strengthen the strategic partnership between the EU and South Africa.

GLO.ACT - Global Action to Prevent and Address Trafficking in Persons and the Smuggling of Migrants