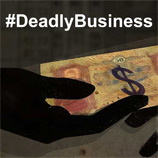 4 April 2017 - #DeadlyBusiness, a UNODC campaign to prevent and combat migrant smuggling, was adopted today by the 11 Member States of the Regional Conference on Migration (RCM) as an initiative to raise awareness about the crime. The event, promoted by UNODC, the Technical Secretariat of the RCM and the Ministry of Foreign Affairs of Mexico, took place in the Mexican Cultural Institute of Washington D.C.

RCM is a high level inter government forum of 11 countries in North and Central America devoted to sharing information and promoting a dialogue on migration. Today's event marked the starting point for the dissemination of #DeadlyBusiness at the national level in all RCM Member States delivering a message of prevention of migrant smuggling.

During its remarks, Antonio L. Mazzitelli, UNODC Representative for Mexico, stressed the importance of coordinated actions to stop criminal networks and "to disseminate key messages to inform the society about the risks of recruiting smugglers." For his part, Felipe De La Torre, UNODC Program Management Officer, mentioned that "when the campaign was conceived in Mexico, the creative process was developed under a global perspective, making this initiative easily adaptable to different countries."

Representatives from the Mexican Foreign Ministry, the U. S. State Department, the RCM Presidency, and the European Union were present at the launch. Additionally, it was attended by Vice Ministers from the Member States of the RCM, the media, international organizations, NGOs, and diplomats accredited in Washington, D.C.

The #ADeadlyBusiness campaign was developed in Spanish and translated into Arabic, English, French and Portuguese. Through a range of products, including posters, videos, a toolkit, infographics and radio spots, the campaign illustrates each of the smuggling methods used by criminals, covering land, sea, and air. It was developed within the framework of a regional project supported by the European Union.