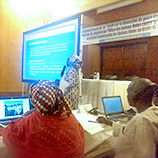 With a view to assisting States in strengthening the effectiveness of their criminal justice responses to terrorism and ensuring that women's rights are respected amid growing terrorism threats, UNODC and the Office of the High Commission for Human Rights (OHCHR) recently organized a sub-regional workshop on "Gender Dimensions of Criminal Justice Responses to Terrorism" in Yaoundé, Cameroon.

In line with the United Nations Global Counter-Terrorism Strategy (UNGCTS), the three-day workshop sought to equip participants with a deeper understanding of how men and women may experience counter-terrorism laws and practices differently.

Speaking about challenges, a women's rights activist from Niger said: "Boko Haram has been very effective at using existing patriarchal structures and gender roles to its advantage," adding: "It is high time that governments catch up and understand how applying gender perspective can assist their fight against terrorism."

On that point, Commissioner Lucy Asuagbor, Special Rapporteur on Women's Rights in Africa of the African Commission on Human and Peoples' Rights said: "Gender integration means asking the right questions: what are women's experiences of terrorism and under counter-terrorism responses?" This included asking what justice and remedies meant to them, and designing programmes like reparation and rehabilitation.

"It is critical taking into account women's specificities when deciding for or against detention and on conditions of detention; as well as when identifying programmes such as de-radicalization or disengagement, to direct women associated with or victims of Boko Haram to," she added.

Throughout the workshop, participants and UNODC experts also discussed the ways to move forward in addressing sexual violence committed by terrorism groups.

Hadiza Abba from UNODC Country Office in Nigeria said: "Terrorism investigations have to be conducted in a gender sensitive manner. Investigating sexual violence by terrorist groups requires expertise on interviewing women and girl victims, and undertaking measures to protect them, which may be lacking in investigation teams specialized on counter-terrorism."

She also drew participants' attention to the need to look beyond counter-terrorism legislation when handling cases of sexual and gender based violence by Boko Haram.

Participating in the workshop were representatives of criminal justice institutions, ministries and civil society organizations of Cameroon, Chad, Niger and Nigeria. Representatives from the African Union also attended the event, exchanging information about their respective experiences through working groups.

The workshop, funded by Japan, is a part of UNODC's capacity building support initiatives for Cameroon, Chad, Niger and Nigeria. It aligns with the Office's previous training sessions related to gender equality among law enforcement and justice authorities in the region. It therefore affirms UNODC's willingness to strengthen its efforts towards gender mainstreaming into its substantive work in West and Central Africa.

UNODC and Terrorism Prevention in West and Central Africa