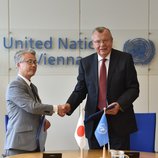 At the signing ceremony, Mr. Fedotov expressed UNODC's appreciation for the support provided by the Government of Japan in past years and for the upcoming period. In 2017, the country's supplementary budget contribution to UNODC is of almost $23 million - a 42.5 per cent increase compared to 2016.

Speaking after the fourth annual review of UNODC's strategic relationship with Japan, Mr. Fedotov said that the country has a long history of close collaboration with the Office in combatting drugs and terrorism, and strengthening crime prevention and criminal justice reform.

He said that Japan and UNODC are bound together by a profound desire to make the world safer from drugs, crime, corruption and terrorism. "With its strong focus on democracy and achieving the 2030 Agenda for Sustainable Development, Japan is an excellent strategic partner for UNODC's work tackling drugs, crime and terrorism not just in the Asia region, but all over the world," he added.

Also speaking, Mr. Suzuki commended UNODC's work and expressed his hope that his country's contribution would further strengthen the close collaboration that both sides have developed.

During the meeting, the Japanese delegation and senior UNODC officials also discussed maritime security and safety and the rise of transnational crime activities in the Sulu-Celebes Sea of the Western Pacific Ocean. Both sides acknowledged the worrying relationship between terrorism and piracy and armed robbery against ships.