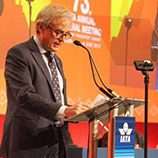 8 June 2017 - While airlines provide a tremendous force for good, connecting businesses to markets, reuniting families and friends, promoting tourism and cultural exchange, their services can be misused by criminals to facilitate the trafficking of men, women and children.

Speaking at the 73rd International Air Transport Association (IATA) Annual General Meeting and World Air Transport Summit, Jean-Luc Lemahieu, UNODC Director of the Division for Policy Analysis and Public Affairs, said "As a father myself of 4 kids, using the term 'human trafficking' in the 21st century is frankly heart-breaking."

"Conflict, crisis, climate change, poverty means that 65.3 million people are on the run, leaving their houses and shelters behind within their countries or across borders," he continued, adding that by seeking new and uncertain opportunities away from familiar grounds, many put themselves unwittingly or wittingly in very risky and vulnerable positions.

In order to move forward, governments and law enforcement agencies must step up efforts to identify, investigate and prosecute those perpetrating these terrible crimes, said Alexandre de Juniac, IATA's Director General. Pointing to the developments, he acknowledged that more airlines are getting involved in initiatives to fight human trafficking.

According to Mr. Lemahieu, human trafficking is an invisible crime as it often blends within regular migration streams. Through its Blue Heart Campaign, UNODC aims to raise awareness of the plight of human trafficking victims and to build political support to fight the criminals behind trafficking. As the first country to join the campaign in 2010, Mexico is one of the earliest allies of the organization.

According to the International Labour Organization, human trafficking has a turnover of $31 million annually. At any given point in time, around three out of every 1,000 persons worldwide are in forced labour or sexual exploitation, adding $150 million to the criminals' pocket.

Mr. de Juniac also said that the Association would work through its governance structure to find ways to help member airlines in the fight against trafficking in persons.

Mike McCarty, Senior Vice President and General Manager at CNN International, explained why a major international brand decided to get involved in such a difficult and harrowing subject.

With its Freedom Project, CNN joins the fight to amplify the voices of the victims of modern-day slavery, highlight success stories and help unravel the tangle of criminal enterprises trading in human life.

The 73rd IATA Annual General Meeting and World Air Transport Summit brought together over 1,000 delegates and media, as well as representatives from some 275 airlines to Cancun, Mexico.