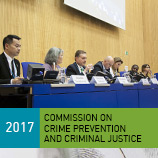 24 May 2017 - Violence against women and girls is still so deeply embedded in cultures around the world that it is almost invisible. Yet this brutality is not inevitable. Once recognised for what it is - a construct of power and a means of maintaining the status-quo - it can be dismantled.

Jean-Luc Lemahieu, UNODC Director, quoted this two-decade-old but valid statement of Dr. Charlotte Bunch, to kick-off the official launch of the Femicide Watch Platform prototype at the 26th Session of the UN Commission on Crime Prevention and Criminal Justice (CCPCJ).

Drawing attention to the UNODC Global Study on Homicide (2013), he said that one of every two women victims of homicide is killed by her intimate partner or a family member. Given the magnitude of the problem, it was not surprising that 'eliminating all forms of violence against women and children' has become a target under the 2030 Development Agenda for Sustainable Development.

The prototype contains key information on femicide such as definitions, official data and landmark documents, and best practices in various action areas, including data collection efforts, investigations, legislation, and prevention measures, from all over the world. Offering a global and integrated platform, it also provides information for policy and decision makers at all levels ranging from criminal justice system to civil society activists and academics, as well as practitioners.

The launch took place at the CCPCJ with a view to raising awareness and ensuring support necessary to turn the prototype into a global tool. Any country or organisation wishing to contribute can do so by contacting ACUNS or the UN Studies Association.

United Nations Special Rapporteur on violence against women, its causes and consequences