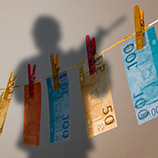 31 May 2017 - Tracking down and disrupting the financing of large terrorist networks such as Daesh (ISIL) remains a concern for the international community. In order to maximize States' responses to combat illicit financial flows and money laundering, UNODC and the Middle East and North Africa Financial Action Task Force conducted a four-day long regional training course in Doha.

To further strengthen counter-terrorism efforts in the region, UNODC, through its Office for the Gulf Cooperation Council Region, brought together a number of experts from its Terrorism Prevention Branch, Global Programme against Money Laundering, and the Corruption and Economic Crime Branch to deliver the workshop.

UNODC's 'Financial Disruption' strategy and tools have been collated from good practices worldwide, and are now being used by experts to eliminate strategic threats to national security. The strategy aims at maximising the impact of their financial disruption operations while minimising the cost and risks associated with them.

The course, hosted by the Qatar National Anti-Money Laundering Centre in Doha, concluded with a live exercise during which counter-terrorism experts from the Middle East and North Africa region used a range of new techniques to understand the 'business model' of terrorist networks, identify critical vulnerabilities and then synchronize a range of disruption options to gradually break down the terrorist networks' ability to operate.