Hosted by UNODC, the movie premiered last week at a packed Economic and Social Council (ECOSOC) Chamber with distinguished attendees from Governments, civil society organizations, and the arts and media community. 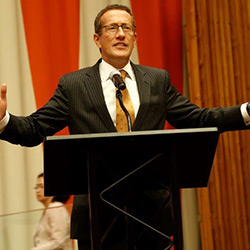 In her remarks, Ms. Monasebian said: "Art is a powerful advocacy tool to raise awareness and we have always used it to complement our work. We hope this dramatic and true-to-life film will move people to take action against the scourge of sex trafficking."

Inspired by the harrowing stories of real women and girls profiled in the award-winning book "Sex Trafficking: Inside the Business of Modern Slavery" by Harvard Professor Siddharth Kara, the movie Trafficked follows three young women from the United States, Nigeria, and India who are trafficked into sexual exploitation.

Starring Golden Globe nominee Ashley Judd, Academy Award nominee Anne Archer, Elisabeth Röhm, Sean Patrick Flanery, Madison Wolfe, and Patrick Duffy, 'Trafficked' explores the complex global crisis of human trafficking. It is a story of the strength of the human spirit, the empowerment of women, and the indestructible will to be free.

Movie attendees were moved by the gripping film and its depiction of the heinous crime of human trafficking and were called upon to support the UN Voluntary Trust Fund for Victims of Trafficking in Persons, especially women and children as they comprise 71 per cent of human trafficking victims.