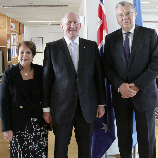 29 September 2017 - The Governor-General of the Commonwealth of Australia, his Excellency Sir Peter Cosgrove, visited the UN Office on Drugs and Crime today. His visit included a meeting with UNODC Executive Director and a tour of the Drug Analysis Laboratory.

Speaking about the meeting with the Governor-General, UNODC Chief Yury Fedotov said: "Australia and the Office have a close partnership dedicated to tackling the complex global challenges of drugs, organized crime, corruption and terrorism."

In this context, Mr. Fedotov expressed appreciation to Australia for its support for UNODC's Regional Programme for Southeast Asia and the Pacific and joint activities against terrorism, drug policy, border management and the critical work of countering human trafficking and migrant smuggling.

Echoing that sentiment, the Governor-General underscored Australia's commitment to a strong rules-based international order. "Today's challenges, including those in combatting transnational crime and illicit drug trafficking and use, are complex and interconnected.  Multilateral engagement, including through the UN is key to coordinating effective international responses," he stressed.

Noting that Australia is a strong supporter of UNODC's work, he said his country has been among the top ten donors to the Office since 2005.

The Governor-General, joined by his wife Lady Cosgrove, also paid a visit to the Office's laboratory, where he was guided by Justice Tettey, Chief of the Laboratory and Scientific Section.

Mr. Tettey affirmed the Government of Australia's support to UNODC knowledge building and technical assistance programmes. Recalling that the laboratory was founded over 60 years ago to help Member States fulfil their control obligations under the International Drug Conventions, he said that its initial focus is on opium, heroin, cocaine and cannabis, as well as ever-growing range of synthetic substances, including methamphetamine and new psychoactive substances.

The tour of the laboratory included an overview about the global dimension of the drug problem, and a practical demonstration of UNODC's technical assistance to source and transit countries. Mr. Tettey emphasized that the equipment is adapted to the developing country context, and can benefit the global community in addressing the challenges of synthetic drugs.

Statement of UNODC Executive Director, Yury Fedotov,after meeting with the Honourable Sir Peter Cosgrove, the Governor-General of the Commonwealth of Australia