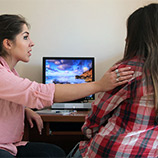 21 September 2017 - Not everyone online is who they say they are. That is the message from the latest UN News podcast, The Lid is On.

Adults posing as young people are using chat apps and social networks to befriend children with the goal of sexually exploiting them - a concept known as grooming - but such abuse can be limited by educating children and their caregivers about the threats online, said Neil Walsh, the head of UNODC global cybercrime programme.

"If you have your own social media, maybe your own Facebook, maybe your own Twitter, proactively, objectively, have a look at what information are you giving out there. Is your photo on the profile? Is your location? Is your date of birth? Do you have pictures of your family? Of your friends? Of your kids? If there is someone who wanted to do anything against you, what could they learn about you by looking at that profile?"

Mr. Walsh, a former police officer who has fought paedophilia for decades, said criminals are increasingly using newer technologies to evade police, so children need to be empowered to understand the risks.

"Cybercrime, cyber-enabled crime, but especially online child abuse, it's one of the most preventable bits of crime, if we do it properly," he said. "It's about education. It's about understanding what that risk is and being conscious in our decisions."

In the video, Mr. Walsh gives advice to caregivers on what they can do to keep children online safe.

A paedophile - before he or she is detected and arrested - is active an average of 13 years, Mr. Walsh said, citing figures from the United States Department of Justice. When arrested, an average offender is in the process of grooming or abusing up to 70 children.

Sonya Ryan, whose 15-year-old daughter was killed by a man who groomed her for 18 months, said parents need to know what their children are doing online and understand the media they are using.

"Connection, communication and discussion," she said in the podcast. "And being up to date with what kids are doing, who they're talking to, and getting the kids to understand that what motivates this is love and care for them, it's never about being nosey. It's getting them to understand that not everyone online is who they say they are."

Since her murder in 2007, Ms. Ryan set up The Carly Ryan Foundation in her daughter's name, and pushed through a new law in Australia that makes it a crime for people, like the killer, to use the internet to prepare to hurt a child.

Passing tough legislation is part of what Mr. Walsh does, along with a team of colleagues spanning the globe. As one of the UN agencies working to protect children from online abuse, UNODC is putting in place education systems in schools, and helping governments to build up national efforts to fight these crimes.

We have seen where images, where written material child abusers use is hosted. It happens in every country. And if a specific country says this doesn't happen here, actually you create a jurisdiction of risk where if I was a child abuser, I would think about where I would want to host my material. Well let's do it in the country where there's no law. Let's do it where there's no policy, where the government says this doesn't exist because maybe culturally or politically, it's uncomfortable."

The full interview with Mr. Walsh and Ms. Ryan is available on SoundCloud.

The Lid Is On podcast: protecting children from online predators