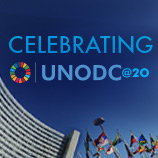 14 September 2017 - Marking the twentieth anniversary of the establishment of UNODC, Secretary-General António Guterres underscored the importance of justice to prevent conflict, promote peace and security, and achieve the Sustainable Development Goals (SDGs).

"I am proud of the support UNODC provides to countries to tackle the interlinked problems of drugs, organized crime, terrorism and corruption," said Mr. Guterres in a video message at a special event to commemorate the agency's anniversary.

In his message, the UN chief also applauded the work and commitment of the agency's staff and reaffirmed his support the UN agency.

Headquartered in the Austrian capital, Vienna, UNODC is mandated with assisting UN Member States in their fight against illicit drugs, crime and terrorism. It was established in 1997 through a merger between the then UN Drug Control Programme and the Centre for International Crime Prevention. Its work is translated to the field-level in all regions of the world through an extensive network of field presences.

In a keynote address, UNODC Executive Director Yury Fedetov said that the anniversary was an opportunity to reflect on the changes, acknowledge the challenges and renew UNODC's commitment to strengthen future cooperation.

"We have come a long way in these past 20 years […] now we have conventions and instruments that have been ratified by nearly every country in the world," he said, noting important progress in fighting heinous crimes.

In his remarks, Mr. Fedotov recounted benefits brought on by globalization but said that the world continues to grapple with persisting problems due to what he said was "asymmetric globalization," leaving many behind, undermining trust and creating instability.

In particular, he warned of a growing nexus between transnational organized crime and terrorism that encouraged cultural property trafficking and generated funds for terrorists.

"Cybercrime has emerged as a truly borderless threat […] use of the dark net for drug trafficking is growing by leaps and bounds [and] cryptocurrencies are providing new avenues for moving and laundering criminal proceeds, straining the knowledge and capacities of law enforcement agencies to keep up," he added.

In his remarks, the UNODC chief also spoke of the importance of the partnership between the UN agency and the private sector and civil society in the areas of drug prevention, anti-corruption initiatives, education and promoting fair play in sports.

"So on this twentieth anniversary of UNODC, in these transformative times, I urge Member States and all of our partners to commit to working together and providing the needed resources, to advance our efforts to address crises, achieve the SDGs and build safer, more secure societies," said Mr. Fedotov.