UNODC increases its engagement to tackle terrorism, organized crime in the Sahel 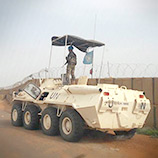 20 September 2017 - The security situation in the Sahel countries is becoming increasingly challenging, and has a substantial spillover effect in the region, as seen by the recent terrorist attacks in Burkina Faso and against the United Nations Multidimensional Integrated Stabilization Mission in Mali (MINUSMA).

The UN Security Council Resolution 2359 adopted in June this year highlights a need for increased regional cooperation and a regional response to the threats of terrorism and transnational illicit trafficking. It also welcomes the creation of the Group of Five (G5 - Burkina Faso, Chad, Mali, Mauritania and Niger) Sahel joint force, to complement and help MINUSMA to carry out its mandate.

In this context, UNODC is working on a plan of action to support the Group of Five (G5) Sahel joint force, with regard to civilian law enforcement, to ensure that the force complies with international norms and standards.

UNODC has worked closely with the G5 Sahel States since its inception in 2014, to promote an integrated response. It assisted the new organization with the institutionalization and operationalization of its Security Cooperation Platform, which brings together law enforcement and justice officials at the national and the regional level.

"UNODC's support to the G5 Sahel has been most beneficial since 2014, and has been instrumental in creating a security cooperation platform and in providing technical assistance to actors in charge of counter-terrorism and transnational organized crime in the Sahel", said Najim El Hadj Mohamed, Permanent Secretary of the G5 Sahel.

"I wish to pay tribute to the activities undertaken by UNODC and its Sahel Programme, and commend the synergy and coordination efforts they have shown in partnership with the countries of the region", highlighted Mbaranga Gasarabwe, Deputy Special Representative of the Secretary-General in MINUSMA.

As the report demonstrates, results achieved by government institutions in the Sahel showcase strong ownership in dealing with the various security challenges they are facing. For instance, in January 2017, Burkinabe legislators passed a law to create a Specialized Judicial Unit to strengthen the fight against terrorism and financing thereof. While Chad has established an anti-terrorist coordination cell by regrouping law enforcement agencies and magistrates to facilitate information exchange.

Malian authorities have dismantled an international drug trafficking network operating in Mali. The arrest was made possible through specialized training, cooperation and information exchange between law enforcement agencies in the region, which UNODC and MINUSMA facilitated.

The partnership that unites and rationalizes the efforts of the various UN agencies on the ground has grown dramatically, especially since the signing of an agreement between UNODC and MINUSMA. UNODC and the Department of Peacekeeping Operations in Mali collaborate on many projects, from carrying out assessments and identifying partners to designing and implementing training workshops and curricula.