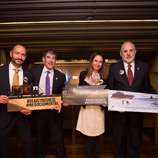 Santiago, Chile, 23 August 2018. The Office of the Attorney General of Chile joined UNODC's #DeadlyBusiness campaign against migrant smuggling on Wednesday. It is the first country in South America to do so, as it aims to spotlight this terrible crime. With this, Chile hopes to reinforce dialogue about this topic in the country.

Migrant smuggling has become a challenge in Chile. Government institutions and civil society organizations, therefore, are addressing this problem from different angles. Their focus reaches from prevention and prosecution to the protection of human rights of smuggled migrants.

One of the objectives of the #DeadlyBusiness campaign is to give visibility to the links between migrant smuggling and other serious crimes such as human trafficking, corruption and money laundering. Additionally, it aims to inform migrants and their families about the risks of recruiting smugglers, and to encourage greater compassion in transit and destination countries by communicating the vulnerable conditions faced by irregular migrants.

Speaking at the event, the National Attorney General of Chile, Mr. Jorge Abbott Charme highlighted the important contribution of migration to destination countries. Mr. Abbott stated that: "Migrant smuggling is a transnational crime, it involves more than one country and therefore it is essential to coordinate."

Mr. Rafael Franzini, who represented UNODC at the event, said: "It is an honor for UNODC that Chile endorsed the campaign and decided to lead this initiative in the Southern Cone." He also expressed his hope that "this event will represent a starting point for the region to continue analyzing the best policies to combat this crime and taking actions to protect smuggled migrants."

Mexico was the first country to adopt the #DeadlyBusiness campaign.Since its official presentation in 2015, the campaign has been promoted at multilateral bodies such as the Ibero American Association of Public Prosecutor's Offices in Lisbon, and the Regional Conference of Migration in Washington D.C. with 11 member countries from Central and North America. In June 2017, Spain became the first European country to adopt the campaign.

Mr. Felipe De La Torre, Programme Management Officer at UNODC, introduced the communication tools of the campaign and highlighted that a positive characteristic of #DeadlyBusiness is its universal language and adaptability to different contexts. It was created with inputs from governments, non-governmental organizations and migrants' associations.

The #DeadlyBusiness campaign was created in Spanish and has been translated to Arabic, English, French and Portuguese. The communication tools include videos, radio spots, posters, infographics, and leaflets that portray the three modalities of migrant smuggling: by land, sea and air.

To learn more about the campaign, visit www.unodc.org/negociomortal and help us to promote it in your country.