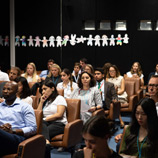 21 August 2018 - Terrorism continues to pose a major threat to international peace and security. It undermines the core values of the United Nations and is an indiscriminate threat that affects people and countries across the globe.

Indeed, as the Secretary-General remarked on the first International Day of Remembrance of and Tribute to the Victims of Terrorism, "No country can consider itself immune, with almost every nationality in the world falling victim to terrorist attacks."

Victims of terrorism often face challenges within the national criminal justice frameworks in receiving the recognition they deserve. This is further exacerbated by a lack of appropriate structures and mechanisms in place to provide the adequate attention to the needs of victims of terrorism.

Highlighting this, UNODC Executive Director Yury Fedotov called for solidarity and sympathy with all victims of terrorism in his message for this International Day. "We must speak out against hatred and division," he said, emphasizing the need to do "all that we can to prevent more children, women and men from being killed or harmed by terrorism and violent extremism."

UNODC's work to support victims of terrorism is being rolled out through a range of activities. For example, the organization is developing a strategic framework on supporting those affected by this crime. Practical assistance is also being offered, most recently in Iraq where UNODC held a workshop on supporting victims of terrorism during which the participants received counselling and psychological support, as well as legal information regarding their rights as victims.

The organization remains fully engaged with other UN offices in supporting all countries to implement the UN Global Counter-terrorism Strategy, including through technical assistance and capacity building to reinforce the universal legal framework against terrorism. As Mr. Fedotov noted, this ensures that "Governments can pursue effective action to bring terrorists to justice, assist victims and make our societies safer."

Speaking at an event to mark the International Day at UNODC's headquarters in Vienna, Dolgor Solongo, from the Terrorism Prevention Branch, said that "victims of terrorism can play an important role in countering the appeal of terrorism". The event commenced with the observation of one minute of silence to honour the victims of terrorism, and following the opening remarks, proceeded with the screening of two documentaries: "Surviving Terrorism: Victims' Voices from Norway" and "Seeking Justice in the Face of Terrorism: Victims' Voices from Mali".

Reflecting the global nature of terrorism and the victims it affects, events were also organized by UNODC offices in New York, Jakarta and Cairo.