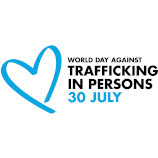 30 July 2018 - Trafficking in persons is a serious crime and a grave violation of human rights. Almost every country in the world is affected by this scourge, whether as a country of origin, transit or destination for victims.

On the World Day against Trafficking in Persons, the United Nations (UN) is calling on the international community to urgently step up responses to the trafficking of children and young people, who make up one-third of all victims worldwide.

"Human trafficking takes many forms and knows no borders. Human traffickers too often operate with impunity, with their crimes receiving not nearly enough attention. This must change," said UN Secretary-General António Guterres.

Releasing a statement ahead of the Day, UNODC's Executive Director Yury Fedotov painted a bleak picture: "Humanitarian crises and armed conflict have left children and young people at greater risk of being trafficked. The perils are compounded further still when children and young people are on the move, often separated from their families." He also expressed concern about the misuse of the internet and new technologies by human traffickers to broaden their reach and to exploit and abuse young people.

"All of us have a responsibility to prevent and stop human trafficking, and protect the health, well-being and potential of all children, in line with the Sustainable Development Goals," Mr. Fedotov continued, underlining that the Office helps governments implement effective anti-trafficking responses, raise awareness through the Blue Heart Campaign, and serves as Coordinator of the Inter-Agency Coordination Group against Trafficking in Persons (ICAT) to harmonize and reinforce responses.

A major step forward in tackling trafficking in children and young people is the Protocol to Prevent, Suppress and Punish Trafficking in Persons, Especially Women and Children, under the United Nations Convention against Transnational Organized Crime, which came into force more than a decade ago. This international instrument represents the best and most effective means to protect children and young people by ending impunity for traffickers, and ensuring that criminal justice responses safeguard the interests of children at every stage.

Finally, UNODC welcomes the coordination and cooperation efforts undertaken within ICAT that led to the publication of an Issue Brief containing key policy recommendations, launched today in New York.For its part, UNODC contributes to building cross-border cooperation and law enforcement capacities in order to keep children and young people safe. The Office is also helping to ensure that child victims become survivors through the UN Trust Fund for Victims of Trafficking. Adopting a victim-centred approach, the Fund supports around 3,000 individuals every year through its non-governmental organization partners.

Inter-Agency Group Against Trafficking in Persons