'Much work to do and no time to waste' in cybercrime fight, says UN chief 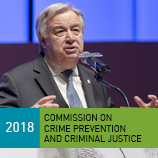 15 May 2018 - The UN body focussing on crime prevention and criminal justice, opened its annual session in Vienna on Monday, calling for a more integrated global response to continuing and emerging challenges, including cybercrime.

Yury Fedotov, Executive Director of the UN Office on Drugs and Crime (UNODC) highlighted the importance of cooperation for achieving the Sustainable Development Goals and countering the rising threat of crime online:

An international effort "to improve law enforcement capacities in all countries, to prevent and  counter cybercrime, are vitally necessary," he said.

"I am proud to say that the Commission and UNODC have pursued effective and pragmatic partnerships to strengthen practical efforts in these areas," he added, highlighting training for police officers, prosecutors and judges to "educate communities and protect people, most of all children," he added.

"Cybercrime is an area in which there is much work to do and  no time to waste," Mr. Guterres said.

"New technologies, including big data and analytics, artificial intelligence and automation, are ushering in a transformative era, sometimes called the fourth industrial revolution," he added, explaining that despite the benefits such progress brings, it also enables new forms of crime.

"Cybercrime is estimated to generate some $1.5 trillion in revenue per year.  And as with most crime, it targets the most vulnerable," he said, stressing the need for a major collective effort to ensure that these technologies are used for everyone's benefit.

Over the coming days, the session will discuss resolutions addressing crime prevention and criminal justice in the context of the  2030 Agenda for Sustainable Development; preventing and countering human trafficking; access to legal aid and restorative justice, among other challenges.

Remarks of the UNODC Executive Director, Yury Fedotov, at the opening of the 27th session of the Commission on Crime Prevention and Criminal Justice