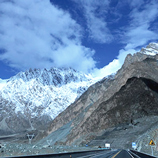 1 October - In the coming decade, major regional infrastructure upgrades in Southeast Asia are expected to lead to freer movement of people and goods and increased economic growth. These welcome developments will, however, also provide more opportunities for organized criminal groups to traffic illicit goods and smuggle across borders.

To fight these crimes, over 70 UNODC-supported Border Liaison Offices (BLO) operate throughout Southeast Asia by strengthening border management and control. Next to enhancing cross-border cooperation, the offices improve capabilities to collect, analyse and disseminate information and increase staff knowledge and skills through training programmes.

A Border Liaison Office was inaugurated in Tashkurgan, China, and the ground broken for another one in Sust, Pakistan, along the only official crossing between the two countries at the Khunjerab Pass in mid-September, thus expanding the BLO programme to a new frontier.

At 16,000 feet above sea level, the Khunjerab Pass is one of the highest border crossings in the world. At the same time, the Karakoram Highway connecting the two countries is adjacent to the Wakan Corridor and China's only official border crossing into Afghanistan.

Numerous cases of heroin and precursor trafficking have been reported over recent years on the Karakoram Highway between Tashkugan and Kashgar in China and Sust in Pakistan. As the China-Pakistan Economic Corridor initiative is projected to expand cross-border trade between the two countries, illicit trade and trafficking of different kinds is also expected to increase and likely diversify.

Based on several years of work with UNODC establishing Border Liaison Offices in the Mekong region, China recently sought assistance to establish such an Office with Pakistan.

At the opening of the Office in Tashkurgan, the Deputy Secretary General of the National Narcotics Control Commission of China Wei Xiaojun, said "we have been working with the UNODC Regional Office team for many years around BLOs in the Mekong region and find they effectively improve cross-border cooperation to address transnational crime."

Regional Representative of UNODC for Southeast Asia and the Pacific Jeremy Douglas said "the expansion of the Border Liaison Office network westward is a sign that the approach can be adopted and used in different places. It is also well timed before cross-border trade and traffic increase as they are expected to under the Belt and Road plan."

At the subsequent groundbreaking ceremony in Sust, César Guedes, UNODC Representative in Pakistan, said the "Border Liaison Office concept has been effectively developed with ground realities in mind and helps countries address different forms of trafficking, often in remote areas."