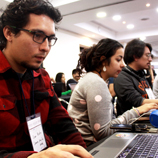 The event, held on 31 August and 1 September, brought together 88 college students and professionals from universities across Colombia and more than 20 mentors. They all aimed to build technology solutions to solve anti-trafficking challenges.

The 1 st place winner, "The Software Design Lab" team composed of 5 students from Los Andes University, came up with a mobile application called FIND, and they will be supported by UNODC in implementing their proposal.

FIND analyses information from different sources and uses technologies to significantly reduce the time it takes to identify a trafficking victim and decide on a course of action. This technological and social ecosystem also validates job offers, deters potential victims, and identifies photos of reported victims.

The "Geolink" team took second place and will travel to Ecuador to present their idea at the VI Latin American Congress on Trafficking in Persons and Migrant Smuggling. Additionally, teams such as "E-Defenders" and "Jim Botóm" developed proposals ranging from the analysis of personal data for the defense of human rights to applications that seek to protect people at risk.

As Carlos Pérez, UNODC National Programe Officer highlighted: "The opportunity to unite international cooperation, private enterprise and civil society with the enthusiasm and commitment of young people resulted in the materialization of practical ideas that provide solutions to the problem of human trafficking."

He further said that UNODC and its Global Programme of Action to Prevent and Combat Trafficking in Persons and Smuggling of Migrants (GLO.ACT) will seek to replicate this experience by joining efforts with other countries in the region.

IBM indicated that all participants of the hackathon that set up their startup will be able to enter the "Startup with IBM" Program, that gives free access for one year to services, infrastructure and more than 160 application programming interfaces (APIs) ready to use, with capacities that include Artificial Intelligence of IBM Watson, Analytics, IoT, Blockchain, Mobile, among others.