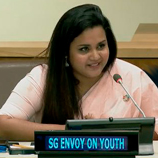 New Delhi (India), 9 April 2019 - In an interview with the United Nations Office on Drugs and Crime (UNODC) South Asia, the UN Secretary-General's Envoy on Youth, Jayathma Wickramanayake urged youth to "reclaim their space" by asserting their voices nationally and globally to strengthen efforts aimed at fostering peace, the rule of law and human rights.

"Young people under the age of 30 account for over half of the world's population. Without the full participation of half of the world population, achieving SDGs and world peace is going to be a dream rather than a reality. The preamble of the 2030 Agenda for Sustainable Development reads that young people are the torchbearers of sustainable development. I say they are also the thinkers, doers and innovators who can realize this agenda," the UN Youth Envoy said in the interview.

Young people make up a huge portion of the population in South Asia. In India, about 600 million people, more than half of the population, are under 25 years old. In Pakistan, 64 per cent of the nation is younger than 30. In Bangladesh, young people aged from 18 to 35 years constitute one-third of the total population.

Ms. Wickramanayake identified unemployment and gender-based violence as pressing issues faced by youth in South Asia. "I think the first challenge is the high-rate of youth unemployment. It is critical to provide inclusive and equal decent employment opportunities for young people. Gender-based violence is still seen in many places, in the form of street harassment to child marriages. Urgent action is required to eliminate discrimination against girls and young women, protect their rights and promote their participation in civic and political life," she said.

The Youth Envoy also extended support to UNODC's efforts towards strengthening the rule of law through education. "Often, 'Justice' and 'Peace' are taught in schools as if they are abstract concepts. It is key that young people identify those concepts as lived realities. Understanding one's role in society and the need for protecting, defending and advocating for human rights is the basis for education. Team work, conflict resolution, mediation are some of the skills that can also be taught through non-formal and informal education outside the class rooms," she said.

"I extend support to UNODC's efforts towards engaging young people in promoting peace, human rights and the rule of law, and using sports and education to prevent crime, substance use and violence. I look forward to joint efforts in this direction," the UN Youth Envoy added.

Ms. Wickramanayake also highlighted the need to strengthen inclusion, as an essential component of national strategies on youth crime prevention. She shared a special message for young people who aspire to be tomorrow's leaders. "All over the world, young people are already organizing, mobilizing and leading positive change for everyone. My message to young people is: keep doing what you are doing. Your voices are essential for the world's progress, so make sure they are heard."